The excitement of discovering a promising new musician is like hearing your favorite piece of music for the very first time. At Noontime Concerts we believe that gifted emerging artists will shape the future of classical music. And that’s why it is our privilege and our commitment to offering young talented musical artists in the early stages of their careers a chance to play on our concert series.

The Helen von Ammon Fund for Emerging Artists provides scholarship-based live performance opportunities for gifted and talented young musicians who are on the threshold of amazing careers. A Noontime Concerts opportunity for these special artists becomes a memorable experience for all of us who are so lucky to see and hear them play. 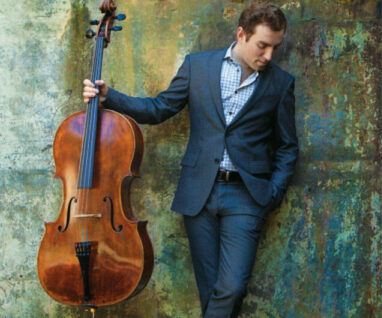 This concert which took place on January 17, 2022, is supported by the Helen von Ammon Fund for Emerging Artists

The Mesa-Yakushev Duo is Cuban-American cellist Thomas Mesa, winner of the $50,000 First Prize in the 2016 Sphinx Competition, and Russian pianist Ilya Yakushev, with many awards and honors to his credit. The duo’s career was launched in part by their extremely successful showcase for presenters at Weill/Carnegie Recital Hall, the result of winning APAP’s highly competitive 2017 Young Performers Career Advancement audition.

Since then, they have performed across the U.S., receiving reviews such as this in the Palm Beach Daily News: “The pair’s playing was grounded in storytelling, as great musical performances often are . . . Mesa and Yakushev always played on equal footing, never with the piano serving as the accompanist to the cello . . . a musical performance that encapsulates the best that good drama has to offer.”

After the pandemic caused the cancellation of two dozen of their ’20-21 concerts, their first live performance, at the Wildflower Festival in PA, received this presenter feedback:

“THOMAS AND ILYA WERE STUPENDOUS! I cannot say enough good things about these two superlative musicians and how much the audience loved them. They had the audience eating out of their hands from the moment they walked on stage until the last note.  Not only are they wonderful performers, but they are also terrific to work with.

The audience was mesmerized by their musicianship and their amazing synergy. Each one enhances the other’s playing, and they have such wonderful charisma both on stage and off. I love that both of them have a great rapport with the audience and a wonderful sense of humor. Everyone enjoyed their comments and their good-natured kidding with each other. As people were leaving the venue, they were all saying wonderful things about how terrific the concert was — exactly what any presenter wants to hear.”  —Judi Mortensen, Director

The brilliant young Cuban-American cellist Thomas Mesa is quickly establishing himself as one of the most charismatic and engaging performers of his generation. Mr. Mesa was the winner of the $50,000 First Prize in the 2016 Sphinx Competition; the Thaviu Competition for String Performance (Chicago); and the Alhambra Orchestra Concerto Competition. His performances of Tchaikovsky’s Rococo Variations with the Los Angeles Philharmonic at the Hollywood Bowl were seen by an audience of over 30,000, and his performance with the Cleveland Orchestra received this rave review from the Cleveland Plain Dealer: “A listener with closed eyes would have been hard-pressed to distinguish [Mesa’s] shapely, expressive performance from that of another gifted artist two or three times his age.”

As a driving force in the Sphinx Virtuosi Orchestra, Thomas has been featured as a soloist on tour in the concerto Dance for a New Day by jazz trumpeter-composer Terence Blanchard. The Sphinx Organization, in conjunction with Carnegie Hall and the New World Symphony, has also commissioned for Mesa a solo concerto by Jessie Montgomery to be toured in 2020.

As a recording artist, Mr. Mesa was featured on the GRAMMY-nominated album, “Bonhoeffer” with the multiple-GRAMMY-winning ensemble, The Crossing Choir. He has appeared with them as a soloist at The Metropolitan Museum of Art in NYC, Longwood Gardens, The Winter Garden (broadcast on WNYC), and the Theological Seminary in New York City. Mr. Mesa and The Crossing also collaborated on the American premiere of Astralis for choir and solo cello by Wolfgang Rihm, with more collaborations and premieres scheduled for future seasons.

Other recordings in progress include the piano and cello music of Brahms and Beethoven; an album dedicated to the music of Debussy; and a special project in collaboration with PARMA Recordings in a “Call for Scores” that will bring together and record new works for solo cello and cello/piano. This project will include an album release concert at The DiMenna Center in New York City and the album will be available on all commercial streaming platforms.

Mr. Mesa is a sought-after educator for his ability to connect with students and teach them to teach themselves. He recently joined the faculty of the SUNY Purchase School of Music, and has given masterclasses at institutions such as UC Berkeley, Boston Conservatory, Northwestern University, DePaul University, University of Nevada-Las Vegas, University of Miami, Meadowmount School of Music, Walnut Hill School, and has held faculty positions at Sphinx Performance Academy, The Heifetz Institute, Music Mountain Festival and School, Brooklyn Conservatory of Music, Montecito International Music Festival, St. Petersburg International Music Academy, and the Mozart Academy at John Jay College in New York City.

Thomas Mesa received his BM from The Juilliard School and his MM from Northwestern University, and he is a doctoral candidate at the Manhattan School of Music. His principal teachers were Timothy Eddy, Julia Lichten, Hans Jorgen Jensen, Mark Churchill, Ross Harbaugh, and Wells Cunningham.

He plays a gorgeous cello made by Richard Tobin in 1820, an instrument that was used in soundtracks for the first movies ever made.

As an artist, Helen von Ammon was particularly sensitive to obstacles encountered by artists of all persuasions on the path to recognition and success. Whether in the applied or the musical arts, artistic expression can be fettered by commercialism, perceived marketability, and myriad other constraints. The Helen von Ammon Fund was established to provide talented musical artists the chance to express the depth and breadth of their capabilities. So it is with gratitude for Helen’s vision and generosity that Noontime Concerts provides professional musicians beginning their careers with an important performance opportunity, exposure, and recognition.

Since its inception in 1985, the Klein competition of its kind, and has helped launch the careers of many performers. Mr. Klein, who died in 1984, devoted himself untiringly to the development of young artists. He was extraordinarily sensitive to their human as well as musical needs. His friends, colleagues, and students who established the Competition in his memory sought to imbue it with his unusual qualities of empathy with and generosity to young musicians. Parallel to the guiding principles of the Helen von Ammon Fund, the Klein Competition seeks to provide recital opportunities, recognition, and assistance to accomplished musicians in the early stages of their careers. Noontime Concerts has been honored to present Klein Competition winners under the auspices of the von Ammon Fund. We look forward to featuring other Klein artists in the 2016 season.

The Klein Competition takes place each year in June at San Francisco State University and at Herbst Theater in San Francisco. For more information, please visit www.kleincompetition.org. We encourage anyone interested in fostering young musical careers to make a tax-deductible gift to Noontime Concerts designated to The Helen von Ammon Fund. Recitalists are also encouraged to submit a demonstration tape or CD along with a resume for consideration to: