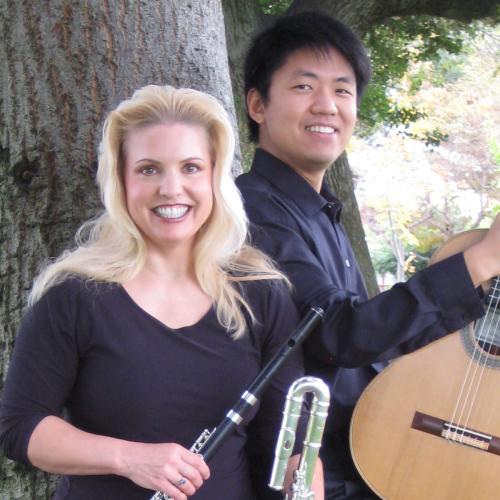 With Steve Lin on guitar and Kris Palmer on the wood flute, alto flute, and recorder, the Black Cedar Duo is the only ensemble of its kind to use this versatile pairing. Their repertoire ranges from the Renaissance, through the Baroque, and forward to recent compositions from Asia and world premieres by our own local composers. “They perform beautifully together: perfect synchronization of subtle rhythms and phrases,” writes the South Bay Guitar Society. They have appeared in concert throughout Northern California and gave the world premiere last season of David Smith’s Russian River Portraits for Alto Flute and Guitar.

Guitartist, Steve Lin is a winner of the Boston GuitarFest Competition, winner of the East Carolina Guitar Competition, and finalist in the Taiwan International Guitar Competition. His albums, Eliot Fisk Series Volumn 1 and Imagen, are available from VGo Recordings. Steve earned a Master of Music from Yale School of Music, and he is completing his Doctorate of Musical Arts from New England Conservatory under Eliot Fisk. He is the professor of guitar at San Jose State University, and he performs regularly as a soloist throughout the United States, Italy, the Philippines, Taiwan, and Mexico. Steve is also a founding member of the Boston Guitar Project.

Flutist and recordist, Kris Palmer is a second prize winner in the National Flute Association’s Young Artist Competition, winner of a Special Presentation Award from Artists International in New York City, and first prize winner in the Carmel Chamber Music Society Competition. Her solo album features her own arrangements of Baroque French works, and she is the author of Ornamentation According to CPE Bach & JJ Quantz. Kris holds a Doctorate of Musical Arts from Rice University, and she runs the flute and recorder program at the Queen of the Holy Rosary School of Music in Fremont, California. She is a former member of the New Mexico Symphony Orchestra and the Chamber Orchestra of Albuquerque.