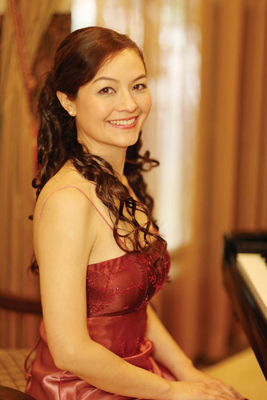 Sandra Wright Shen has been described as a classical “pianist of the first order” and a “heartstopping beauty”. With her passion, musicality, and inspiration, she aims to move hearts through music.

Sandra received her BM and MM in Piano Performance from the Peabody Conservatory, under Ann Schein. Sandra currently teaches at the Brevard Music Institute, and previously taught at Southern Illinois University.

Mixing music and philanthropy, Sandra has played benefit concerts for disaster victims, foster children, and music education. An ambassador of classical music, Sandra filmed a 4-part series titled “The Movements of the Master Pianists” for Hong Kong TV. She also hosted a classical radio program in Taiwan. She has taught music appreciation to young and old, from CEOs to mentally challenged children, and orphans. Because of her ability to touch people’s hearts with music, and through her sweet, positive spirit, audiences throughout the world have declared her “an angel”.