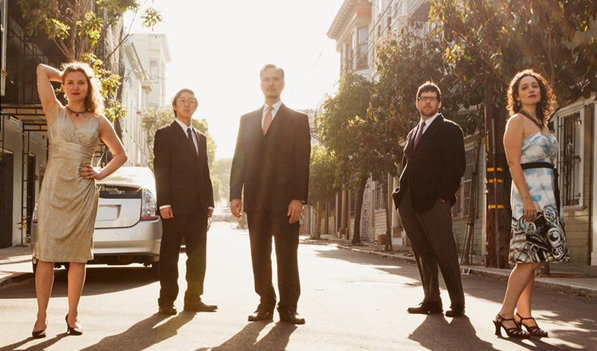 Called “engrossing” by the San Francisco Chronicle and praised by San Francisco Classical Voice for her “beautiful phrasing” and “striking tone,” soprano TONIA D’AMELIO has established a reputation as one of the most sought-after solo and ensemble singers in the Bay Area. She recently made her company debut with West Edge Opera as Drusilla in a new performing edition of Monteverdi’s L’Incoronazione di Poppea and her Los Angeles debut in a program of secular French Baroque cantatas with Los Angeles Baroque Players. Next month, Tonia returns to Portland, Oregon, as a guest artist for the third time at the William Byrd Festival.

CHRISTOPHER KULA started his musical career as a boy treble at the age of seven in the San Francisco Boys Chorus. He currently conducts Pacific Collegium and Chapel College Men and Boys Ensemble, and has been praised for his work with the Pacific Boychoir, Portland Pro Musica, the choir of St. Mark’s Parish, Portland Symphonic Boychoir and others. By day, he works as Ruby Web developer.

The career of baritone NIKOLAS NACKLEY has spanned the American, European, and Asian continents. This season marked his debut with the Los Angeles Philharmonic in which he reprised the role of Joe Pitt for the West Coast premier of Eötvös’s Angels in America. Frequently engaged for oratorio and recital work, Nikolas recently performed Bach’s BWV 82, Ich habe genug, with the Boulder Bach Festival. He has been featured on numerous occasions with the Handel and Haydn Society at Boston’s historic Symphony Hall and has been a frequent soloist in the renowned Emmanuel Music Sunday Cantata Series.

DANIELLE REUTTER-HARRAH is a versatile performer with a particular enthusiasm for historically informed performance practice. Her most recent engagements included Stravinsky’s Four Russian Songs, Vivaldi’s Gloria, Handel’s Dixit Dominus, Hummel’s Mass in D Major, and Bach’s St. Matthew Passion with both the American Bach Soloists and the Baroque Chamber Orchestra of Colorado. She has been a professional member of the San Francisco Symphony Chorus since 2011 and is a cofounder of the duo Jarring Sounds with lutenist guitarist Adam Cockerham.

Tenor BRIAN THORSETT has been seen and heard in over 100 diverse operatic roles, ranging from Monteverdi to Britten, back to Rameau and ahead again to works composed especially for his talents. Brian’s diversified repertoire has taken him to concert halls across the US and Europe. He is an avid recitalist and a graduate of San Francisco Opera’s Merola Program, Glimmerglass Opera’s Young American Artist program, American Bach Soloists’ Academy, and the Britten-Pears Young Artist Programme. Brian is currently on faculty at Santa Clara University, where he directs and conducts Opera Workshop, teaches Beginning Voice and maintains a private studio.

ERIC TUAN enjoys a varied career as singer, conductor, and accompanist throughout the San Francisco Bay Area.  A versatile tenorwith interests in early music and new music, he was recently featured in San Francisco Lyric Opera’s critically acclaimed production of David Lang’s The Little Match Girl Passion, which enjoyed performances in both San Francisco and Odense, Denmark. Eric currently serves as the music director at Christ Episcopal Church in Los Altos and is the founding director of a new chamber choir, Convivium.