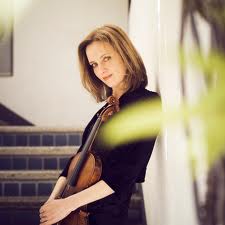 Mariya Borozina, who joined the San Francisco Opera Orchestra’s first violin section in 2007, was born in Moscow, Russia. At the age of five, following in the footsteps of her violinist father, she enrolled in the Gnessins Special School of Music. She then studied at Moscow’s Tchaikovsky Conservatory in the studio of Marina Yashvili. After coming to the United States, Mariya graduated from the Manhattan School of Music, where she studied with Glenn Dicterow, Lisa Kim, Yoko Takebe, and Albert Markov.

During her studies, Mariya led an active musical life. In Moscow she performed in the Moscow Symphony Orchestra; the Amadeus Chamber Orchestra, where she worked her way up from section violin to concertmaster; and the Vainberg Quartet. In New York Mariya played in several orchestras and ensembles, including New Haven Symphony Orchestra and DiCapo Theater; and was a substitute for the New York Philharmonic and New World Symphony.

Participation in musical festivals took Ms. Borozina around the globe and gave her the opportunity to work with such maestros as James Levine, Kurt Mazur, Pierre Boulez, Sir Neville Marriner, Mstislav Rostropovich, and Marcello Viotti. She has served as Concertmaster with the UBS Verbier Festival Orchestra, the Manhattan School of Music Symphony, and the International Orchestra Institute Attergau. She has played with the UBS Verbier Chamber Orchestra, Spoleto Festival USA, and Lucerne Festival Academy.

Mariya has been a member of the San Francisco Ballet Orchestra since 2004. She substitutes with the San Francisco Symphony and performs frequently around the Bay Area and Europe, as an orchestral and chamber musician.

In her free time Mariya likes to read and to spend time with her mother, who, along with her father, was always very supportive and played an important role in her becoming a professional musician.