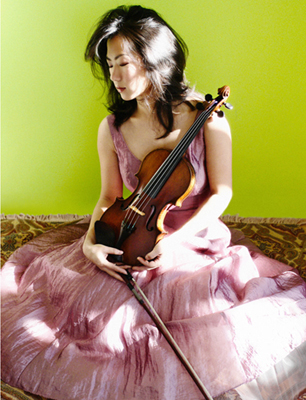 Hailed by Opus Magazine as “a stunning musician,” violinist Livia Sohn performs widely on the international stage as concerto soloist, recitalist, and festival guest artist in Europe, North America, South America, and Asia. The Strad Magazine says “Livia Sohn possesses a remarkably lithe and transparent tone of exceptional purity. [Her] virtually blemishless accounts are nothing short of remarkable. Even when under the most fearsome technical pressure at high velocity, every note rings true with pinpoint accuracy.”

This past season saw Livia performing such diverse repertoire as solo violin sonatas written by living composer Jonathan Berger at The Broad Stage in Los Angeles, to Tchaikovsky Violin Concerto with the Wheeling Symphony in West Virginia, as well as being a guest artist at festivals such as the Cartagena International Music Festival in Colombia, Spoleto USA, Bay Chamber Concerts, and Maverick Concerts in NY. Highlights from this coming season sees Livia performing as soloist with orchestras in repertoire ranging from Mozart to Korngold to Pärt, in cities as wide-spread as El Paso, TX, to Berlin, Germany. This season will also see Livia featured in the CD release of Benjamin Britten’s Violin Concerto, paired together with the concerto “Jiyeh” by Israeli-American composer Jonathan Berger, written for and premiered by Livia, in December 2012 under the label Eloquentia.

An avid chamber musician, Livia is part of the piano trio Latitude 41, which was formed in 2009 with pianist Bernadene Blaha and cellist Luigi Piovano. Their debut CD of Schubert’s monumental Trio in E flat major, and Schubert’s “Notturno”, was released in 2011 on the label Eloquentia to rave reviews. Among other places they have performed in Vancouver, New York, Los Angeles, Boston, and San Francisco.

In 1999, National Public Radio’s “Performance Today” hosted Livia as an Artist-in-Residence for five days, during which she gave live interviews and performances of a different program each day. Other career highlights include performing at the inaugural concerts of Harris Hall at Aspen, and her performance with Lukas Foss and the Brooklyn Philharmonic Orchestra at the “11th Annual New Year’s Eve Concert for Peace”, held at New York City’s Cathedral Church of St. John the Divine before an audience of 10,000.

In 2007 Naxos released the disc “Opera Fantasies”, which features Livia and pianist Benjamin Loeb playing opera arrangements and includes three world premiere transcriptions. Livia can also be heard on iTunes performing the Dvorak and Khachaturian Concertos in a live recording with the Budapest Philharmonic Orchestra, and on Naxos’ American Classics series in a CD entitled “Miracles and Mud”, featuring works by Jonathan Berger. Livia gave her first public performance at age eight. In 1989, at the age of 13, she won First Prize in the Yehudi Menuhin International Violin Competition, where she was also awarded the Audience Prize. She attended the Juilliard Pre-College Division from the age of seven, at which time she began her studies with Dorothy DeLay and Hyo Kang. She continued under their tutelage at the Juilliard School, where she also studied chamber music with the legendary Felix Galamir. Livia plays on a J. B. Guadagnini violin crafted in 1770 and a Samuel Zygmuntowicz made in 2006. She has been on faculty at the Music Department of Stanford University since 2005.