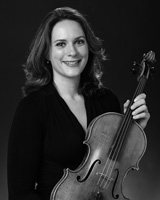 Joy Fellows joined the San Francisco Opera in 2008, and was recently appointed Assistant Principal of the San Francisco Ballet. Previously, she was Associate Principal Viola of the Indianapolis Symphony, and has also been a member of both the St. Louis Symphony, and the New World Symphony in Miami. While growing up in Oklahoma, she began her orchestral career at the age of 14 with the Oklahoma Sinfonia, and later the Oklahoma City Philharmonic.

Joy has been a resident chamber musician at the Festival dei Due Mondi in Italy, and was also selected to participate in the Juilliard String Quartet seminar. She has also participated in the Sun Valley Summer Symphony, Central City Opera (Colorado), Pacific Music Festival (Japan), and has participated and taught at the Bowdoin International Music Festival. Joy has performed as chamber musician and as a soloist across the US, Europe and Asia.
Ms. Fellows holds a Bachelors degree from the University of Oklahoma and a Masters degree from The Juilliard School. Joy studied chamber music with Robert Mann, Nicholas Mann, Earl Carlyss, Joel Smirnoff, and Sam Rhodes. Her principal teachers included Wayne Crouse, Matthew Dane, and Samuel Rhodes of the Juilliard String Quartet.
Our Next Concert