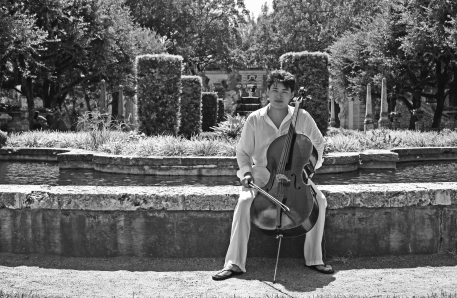 Born in Seoul, Korea, Mr. Kim immigrated to the United States in 1995. His father, a Protestant pastor, possessed a keen ear for music despite no formal musical training and introduced him to the cello through VHS tapes of Pablo Casals playing the Bach’s Solo Cello Suites. Learning strictly by imitation, the seven-year-old was invited to train at the Juilliard School within the year. So began his professional training at Juilliard, but it was not until he met world renowned soloist and pedagogue Janos Starker the following summer that he became certain music was his calling. Attending a New York City public school, learning to speak English, and adjusting to life in the United States was not always easy. Starker’s invitation to come study with him was pivotal, inspiring the young cellist to continue with renewed motivation. Starker later remarked, “Jonah is an exceptional talent. He is at the top of his generation.”

Mr. Kim’s recordings and live performances can be heard on international, national and local radio and TV networks. He also records for artists in other genres and has collaborated live in concert with Andrea Bocelli, Mariah Carey, Cristian Castro, Vic Damone and Kenny Rogers to name a few. Dedicated to sharing music in ways that positively impact the community, Mr. Kim plays in outreach events wherever he performs. He visits schools, hospitals, assisted living facilities and even juvenile detention centers with Ensemble SF, connecting not only through performance, but also in masterclasses and lectures as teacher and coach. He is also the youngest instructor at CelloSpeak, a cello retreat at Bryn Mawr College, where he has taught for the last five years. He plays a Jean-Baptiste Vuillaume made in 1845 as well as a 2016 copy of it by Haide Lin. His bow is by Jules Fétique from the workshop of Eugène Sartory in Paris circa 1904.