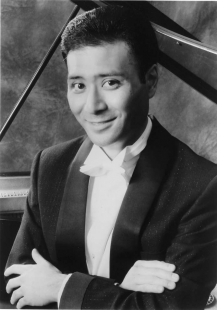 Since his dramatic 1997 Van Cliburn Gold Medal triumph, Jon Nakamatsu’s brilliant but unassuming musicianship and eclectic repertoire have made him a clear favorite throughout the world both on the concert circuit and in the recording studio. He has performed widely in North America, Europe, and the Far East and has collaborated with such conductors as James Conlon, Philippe Entremont, Marek Janowski, Raymond Leppard, Stanislaw Skrowaczewski, Michael Tilson Thomas, and Osmo Vänskä.  His extensive recital tours throughout the United States and Europe have featured appearances at Carnegie Hall and Lincoln Center in New York City, at the Kennedy Center in Washington, D.C., and in cities such as Boston, Chicago, Cincinnati, Paris, London, and Milan.

Mr. Nakamatsu maintains a very active touring schedule with orchestra performances, chamber collaborations, and solo recitals.  In April of 2011 Mr. Nakamatsu made his debut at the prestigious Grace Rainey Rogers Auditorium of the Metropolitan Museum of Art in New York City.  Reviewing this recital April 13, 2011 for The New York Times, the esteemed music critic Allan Kozinn extolled his performance:

The pianist Jon Nakamatsu plays with the calm assurance that comes of having both a solid technique and a gentle, introspective, interpretive spirit.  On Saturday evening, Mr. Nakamatsu…played works that demand both a graceful, singing quality and assertive muscularity, and he delivered as fully in the virtuosic passages as in the lyrical ones….he began with an elegant, texturally transparent account of a Rameau Gavotte with six variations, originally for harpsichord.  That made for a striking contrast with Brahms’s First Sonata (Op. 1), which followed immediately: Mr. Nakamatsu dived into the sonata’s outgoing introduction, and in the final two movements he brought Brahms’s inner firebrand into the spotlight….Chopin’s Andante Spianato et Grande Polonaise Brillante (Op. 22) also showed Mr. Nakamatsu at his most vigorous; the finale of the Polonaise, in particular, was dazzling.  Yet, as exciting as his most forceful playing was, he was at his most engaging in music that required a more supple and variegated touch.  He couched the Andante of the Brahms in soft hues that illuminated the score’s complex heart, and his readings of Liszt’s “Three Petrarch Sonatas” (as well as the Schumann-Liszt “Widmung,” offered as his first encore) were shapely and poetic, with lithe top lines sailing over gauzy accompaniments.

In August of 2010, he was heard in recital for the Chopin Institute in Warsaw at Warsaw’s Philharmonic Hall; in October he returned to China for a debut at the Beijing International Piano Festival; and earlier this season he also performed with jazz pianist David Benoit in a special program mixing Gershwin with jazz and classical repertoire at the prestigious Montalvo Arts Center in Saratoga.

In past seasons, Mr. Nakamatsu has been soloist with many leading orchestras including those of Dallas, Detroit, Indianapolis, Los Angeles, Rochester, San Francisco, Seattle, Tokyo and Vancouver.  In February of 2010, he was the featured soloist for the highly acclaimed American tour of the Berlin-based Philharmonie der Nationen, conducted by Justus Franz, performing Brahms’ First Piano Concerto and Rachmaninoff’s Third Piano Concerto in twelve cities nationwide.  Numerous summer festival engagements have included appearances at the Aspen, Tanglewood, Ravinia, Caramoor, Vail, Sun Valley, and Britt festivals.  In 1999, Mr. Nakamatsu was invited to the White House to perform for President and Mrs. Clinton.

Among the numerous chamber ensembles with which Mr. Nakamatsu has collaborated are the Brentano, Tokyo, Prazak, St. Lawrence, and Ying String Quartets.  He also tours frequently with the Berlin Philharmonic Wind Quintet and in 2008 debuted on the Philharmonic’s chamber music series performing with the Quintet and members of the orchestra.  Together with the acclaimed clarinetist Jon Manasse, Mr. Nakamatsu tours regularly as part of the Manasse/Nakamatsu Duo.  In 2008, the Duo released its first CD (Brahms Sonatas for Clarinet and Piano) which received the highest praise from The New York Times Classical Music and Dance Editor James R. Oestreich, who named it a “Best of the Year” choice for 2008.  Their latest CD (American Music for Clarinet and Piano) released in 2010 has also garnered international rave reviews, including in the March/April 2011 edition of American Record Guide: “Once again, Manasse and Nakamatsu proved that they are one of the top clarinet-piano duos around, offering an unrivaled combination of timbral clarity, polished technique, chamber teamwork, and artistic commitment.”  Mr. Nakamatsu and Mr. Manasse also serve as the Artistic Directors of the esteemed Cape Cod Chamber Music Festival, founded by pianist Samuel Sanders in 1979.

Jon Nakamatsu studied privately with the late Marina Derryberry from the age of six, and has worked with Karl Ulrich Schnabel, son of the great pianist Artur Schnabel.  He has also studied composition and orchestration with Dr. Leonard Stein of the Schoenberg Institute at the University of Southern California, and pursued extensive studies in chamber music and musicology.  Mr. Nakamatsu is a graduate of Stanford University with a bachelor’s degree in German Studies and a master’s degree in Education.