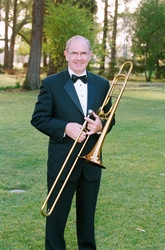 John Monroe (trombone) is principal trombone of the Ohlone Wind Orchestra. In 2009, he joined 81 other trombonists to perform Henry Brant’s “Orbits” in the Guggenheim Museum, recognized as one of New York City’s top ten musical events of 2009 (New Yorker). Member of the Cramer Trombone Choir, John performed for the Queen of Denmark in 2009, and the 2012 International Trombone Festival in Paris.  John plays Solo Euphonium for the Mission Peak Brass Band, and is principal trombone of Brazzissimo.  He has performed in master classes for Joseph Alessi, Zachariah Spellman, and the Sotto Voce tuba quartet.