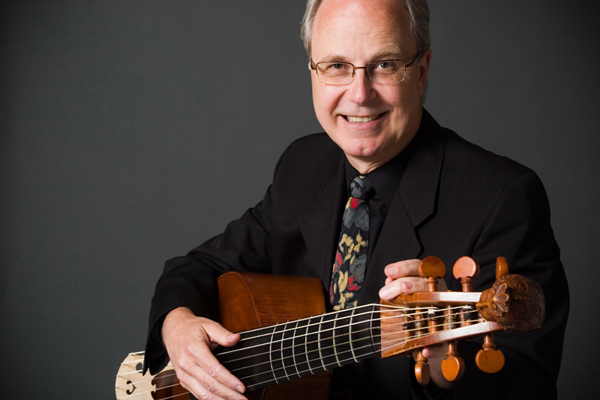 John has made solo recordings of gamba music by J.S. Bach, C.P.E. Bach, Marais, Telemann, Abel, Hume, Simpson, Sainte-Colombe, Kühnel, and Handel, and can be heard on the Centaur, Meridian, Koch, Dorian, Musica Omnia, Music and Arts, Musical Heritage Society, and other recording labels. He has also made many concert recordings for radio and television in both Europe and the U.S.A., including the BBC, NPR’s Performance Today, and CBS television’s Sunday Morning program. John has been Music Director for performances of Monteverdi’s Vespers of 1610 and Purcell’s Dido and Aeneas (both for the Renaissance and Baroque Society of Pittsburgh), and in 2005 he conducted a fully staged production of Monteverdi’s L’incoronazione di Poppea at California State University in Sacramento.
In the San Francisco Bay Area John can be heard with his chamber groups Music’s Re-creation and the Sex Chordæ Consort of Viols as well as Magnificat, Jubilate Orchestra, American Bach Soloists, and Philharmonia Baroque Orchestra. Over the years he has worked with a long list of distinguished artists including Andrew Parrott, Jaap Schroeder, Stanley Ritchie, Marion Verbruggen, Julianne Baird, Judith Nelson, Paul Hillier, Andrew Lawrence King, Helmuth Rilling, Bruno Weil, Kent Nagano, Jeffrey Thomas, Nicholas McGegan, Warren Stewart, Malcolm Proud, Ensemble Rebel, and Chatham Baroque. As a chamber musician he performs on all sizes of the viola da gamba family, including the G and D violones.
John is the first American to be awarded the Soloist’s Diploma for viola da gamba from the Royal Conservatory in The Hague, Holland, where his teacher was Wieland Kuijken. Before that, he studied baroque performance practice with Nikolaus Harnoncourt at the Mozarteum in Salzburg, Austria.  He earned his Bachelor’s degree in music at Antioch College in Yellow Springs, Ohio, where he first became interested in the performance of early music while collaborating with fellow students Robert Eisenstein and Scot Reiss. He has been the recipient of a Fulbright Fellowship, and has been selected for the Touring Artist Roster of the California Arts Council. Publications include three collections of 17th-century viol consort music by John Hingeston for PRB Productions, as well as reviews and articles in the Journal of Seventeenth Century Music and Early Music America.
John has taught music history at Carnegie-Mellon University, and has served as Affiliate Assistant Professor and Artist-in-Residence at the University of Washington. He is a frequent faculty member at workshops such as the National Conclave of the Viola da Gamba Society of America, Viols West, Amherst Early Music, Aston Magna, and the San Francisco Early Music Society summer workshops at Dominican University. He is currently Lecturer in Viola da gamba at Stanford University, and Lecturer in music history and literature at California State University, Sacramento.
Our Next Concert