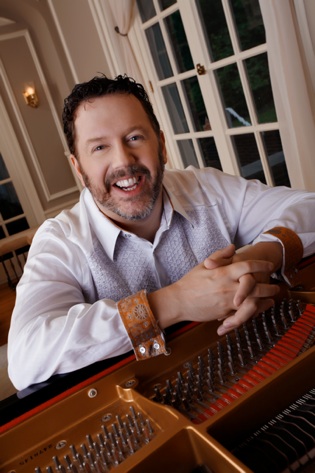 Acclaimed by the Frankfurter Allgemeine Zeitung as “a commanding solo player, the most supportive of accompanists, and a leader in chamber music,” pianist Jeffrey Sykes has performed throughout the United States, Canada, Mexico, and Western Europe. He has garnered praise for his interpretations of music both old and new: The San Francisco Examiner praised his appearance with the San Francisco Contemporary Music Players as “a tour-de-force performance [that was] the evening’s major delight.” And The Well-Tempered Ear commented that “Mr. Sykes displayed the ideal Chopin touch and tone. His fleet fingers captured the lightness of the bel canto singing style in Chopin, with its filigree runs and quickly turned ornaments, all making the hard sound effortless and graceful.”

Together with violinist Axel Strauss and cellist Jean-Michel Fonteneau, Sykes is a founding member of the San Francisco Piano Trio. Praised for its virtuosic ensemble playing throughout a wide repertoire ranging from the trios of Haydn and Beethoven to those of Leon Kirchner and Astor Piazzolla, the trio recently appeared on San Francisco Performances’ Salon at the Rex series and has upcoming performances on series in the Bay Area and the Midwest. Mr. Sykes’ other recent activities include a Carnegie Hall recital under the auspices of the Pro Musicis Foundation; a live broadcast over WGBH, Boston Public Radio; and a tour of Chile sponsored by the US State Department.

Mr. Sykes is the founder and artistic director of the Bach Dancing and Dynamite Society of Wisconsin, a highly-acclaimed and innovative chamber music festival now in its twenty-first season. He is a regular guest artist in the Cactus Pear Music Festival in San Antonio, Texas and Music in the Vineyards in Napa Valley, California; and in 2007, he served as the guest artistic director of Music in the Vineyards. He has recorded for the Albany, CRI, Mandala, Centaur, and Cactus Pear record labels.

For the last eighteen years, Mr. Sykes has served as the Music Director of Opera for the Young, a preeminent producer and presenter of opera for children that has introduced more than 2 million children to opera. He works extensively as a vocal coach throughout the US and teaches at the University of California at Berkeley. He also joined the faculty of California State University-East Bay in the fall of 2008 where he directs the piano accompanying and vocal coaching programs.

Mr. Sykes holds degrees with highest honors from the University of North Carolina at Chapel Hill and the Franz-Schubert-Institut in Baden-bei-Wien, Austria. He continued his education as a Fulbright scholar at the Hochschule für Musik in Frankfurt am Main, Germany. A recipient of the Jacob Javits Fellowship from the US Department of Education, he completed his doctorate at the University of Wisconsin-Madison.