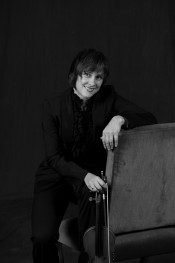 A native of Berlin, Germany, violinist Iris Stone has been a member of the New Century Chamber Orchestra for the 1995/96 season under Stuart Canin and has been performing with the orchestra since 2001.

Iris first came to the United States in 1993 as a recipient of the prestigious Fulbright scholarship. Subsequently she worked with violinist Donald Weilerstein, founding member of the Cleveland Quartet, and was granted a long-term residency at the Banff Center for the Arts in Canada.