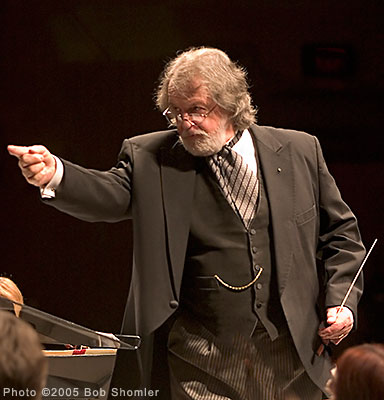 George Cleve was born in Vienna and at the age of four moved to New York with his family. He received his musical training at the High School of Music and Art, and the Mannes College of Music, where he studied viola with Paul Doktor, chamber music with William Kroll, and conducting with Carl Bamberger. In addition to studying piano and conducting with Seymour Lipkin, he pursued further conducting studies with Pierre Monteux, George Szell, Leonard Bernstein, and Franco Ferrara. George Cleve is Music Director of San Francisco’s Midsummer Mozart Festival, which he founded in 1974. He was appointed Music Director of that orchestra, which through his leadership had become one of the finest in America. As a guest conductor he has appeared with most of the American Orchestras, including the New York Philharmonic, Los Angeles Philharmonic, Boston, Cleveland, Pittsburgh, San Francisco, and Montreal Symphony. He has also worked at New York’s Mostly Mozart Festival and at the Ravinia Festival with the Chicago Symphony. Invited by choreographer Twyla Tharp in 2000 to conduct the world premiere of her The Beethoven Seventh at New York City Ballet, Mr. Cleve subsequently has become a frequent guest conductor there, conducting The Firebird, Concerto in 5 Movements, Symphony in C, Le Tombeau de Couperin, and Midsummer Night’s Dream, and other works in ensuing seasons. Mr. Cleve has made several Mozart recordings featuring symphonic works, overtures, and concerti. He received Grammy nominations for his recordings with the Midsummer Mozart Orchestra on the Sonic Arts label. Mr. Cleve was awarded the rank of Officer of the Order of Arts and Letters of the Republic of France in recognition of this performances of French music. He has also received an Honorary Doctorate of Fine Arts from the University of Santa Clara (CA), the Gold Medal of Honor of the Republic of Austria, and the Silver Medal of the City of Vienna for his part in founding the Midsummer Mozart Festival, which is just beginning its 38th season.