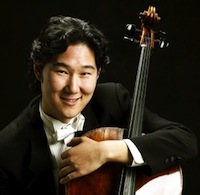 Cellist Eric Sung is the Principal of the San Francisco Ballet Orchestra. He has studied at the Cleveland Institute of Music, University of Southern California, and the Juilliard School. His principal teachers have been Stephen Geber, David Geber, Ronald Leonard, Fred Sherry, and Lynn Harrell.

Eric has been heard as soloist with the Colburn Chamber Orchestra, Saratoga Symphony and the Aspen Academy of Conducting Orchestra. He has participated in the New York String Seminar, Piatigorsky Seminar and has attended the National Repertory Orchestra, National Orchestra Institute, Pacific Music Festival and Verbier Festivals.