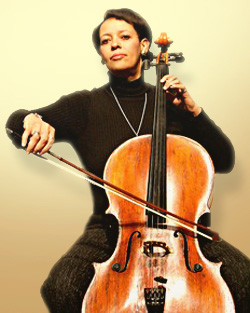 For 23 years Dawn Foster-Dodson played with the San Jose Symphony and is currently a member of the Silicon Valley Symphony, California Symphony, Midsummer Mozart Festival and has freelanced with most of the other Bay Area Orchestras. Dawn has been concerto soloist with the San Francisco Concert Orchestra, Oakland Youth Orchestra, and she premiered the “Concerto No.1 Scenes from the Wildwood” which was written for her and the Los Angeles African American Chamber Orchestra by Josephine Saunders Herbison. She has also played with many of the world’s favorite artists, including Pavarotti, Marion Anderson, YoYo Ma, Mercedes Ellington, Ray Charles, Liza Minelli, Stevie Wonder, George Benson, Al Jarreau, Ben Vereen, Rod Steward, and Smoky Robinson. She has recorded with the San Jose Symphony, Midsummer Mozart Orchestra, done independent recordings at Skywalker Ranch and has recorded her own CD entitled “Dawn Plays” Kol Nidrei released in 2003. She began teaching private students in the early 1980’s and is currently a performing Arts Department faculty member at Saint Mary’s College in Moraga, teaching chamber music ensembles and private cello lessons. Dawn was proclaimed “The Vibrato Doctor” for a tutorial course she created and teaches to  improve vibrato technique.