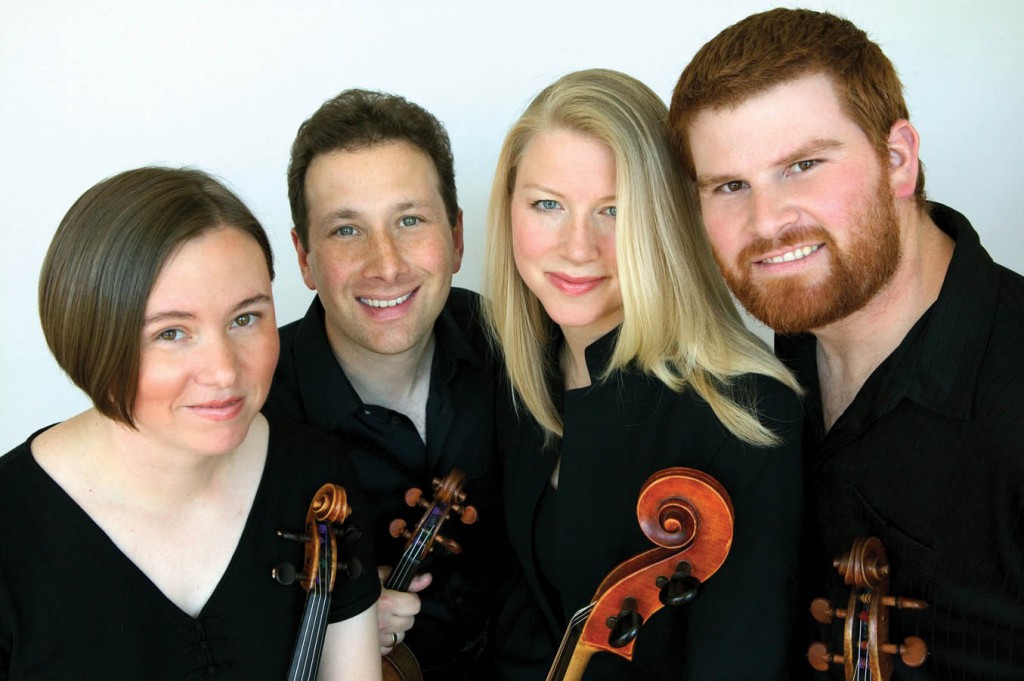 The Cypress String Quartet has brought audiences to their feet for over a decade with virtuoso performances at major concert venues around the world, including the Kennedy Center, Library of Congress, Detroit, Columbus, and Honolulu Chamber Music Societies, Stanford Lively Arts, Krannert Center, Ravinia Festival, and many more. Widely celebrated for their passionate dedication to the genre and for the exuberance and power of their performances, Quartet members Cecily Ward and Tom Stone, violin; Ethan Filner, viola; and Jennifer Kloetzel, cello, combine technical precision with imaginative programming to create truly unforgettable concert experiences.

Singled out by Chamber Music Magazine as “a generation X ensemble to watch,” the Cypress is reaching out in new ways to ignite interest in chamber music. In January 2007, the Quartet fused tradition with technology in its critically acclaimed premiere of Inspired by America, a spirited multimedia collaboration with best-selling author Jacob Needleman and Emmy Award-winning film maker Michael Schwarz. Supported by funding from the National Endowment for the Arts, Inspired by America blends live music, original film, and spoken word in an evocative, thought-provoking portrait of the American spirit. Inspired by America debuted at the Lied Center of Kansas and the Krannert Center at the University of Illinois and will be available for national touring through 2010.

Since its inception in 1996, the Cypress String Quartet has built a respected body of new music, commissioning and premiering over 25 works from many of America’s leading composers. To commemorate Felix Mendelssohn’s 200th birthday in 2009, theCypress and the Library of Congress have co-commissioned a new quartet from brilliant young American composer Kevin Puts. Paired with Mendelssohn and Beethoven quartets, Mr. Puts’ new work will premiere in February 2009 in Washington DC as part of the “Mendelssohn on the Mall” project in conjunction with the National Gallery of Art and the Smithsonian Museum. Other recent Cypress commissions have come from 2005 Grawemeyer Award winning composer George Tsontakis, and Grammy nominees Benjamin Lees and Jennifer Higdon. Four original Cypress commissions are listed on Chamber Music America’s list of “101 Great American Ensemble Works.”