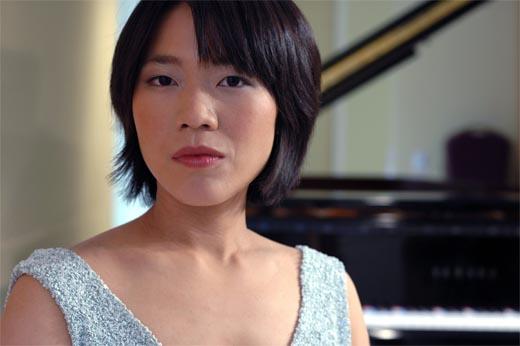 Declared a “…first-class talent…” and praised for her “…poetic use of color and confidently expressive phrasing…” (The Philadelphia Inquirer), Taiwanese pianist Ching-Yun Hu is a winner of the 2009 Concert Artists Guild International Competition. In 2008, she captured the top prize and the Audience Favorite Prize at the 12th Arthur Rubinstein International Piano Master Competition in Tel Aviv. Ms. Hu’s final round performances of the Beethoven Piano Concerto No. 1 and Prokofiev Piano Concerto No. 3 with the Israel Philharmonic were broadcast live to 38 countries. Deeply impressed by her artistry, The Jerusalem Post hailed her “…superstar quality that everybody looks for…Musical, energetic and full of flair.”

This victory resulted in a seven-city recital tour across Israel and a special invitation from the Israel Philharmonic to perform Beethoven’s Piano Concerto No. 4, stepping in for Hélène Grimaud on only a week’s notice. Since then, Ching-Yun Hu’s career has flourished with a host of international engagements on five continents. Featured concerto performances in 2012-13 include Rachmaninoff Concerto No. 2 with the Maidstone Symphony (UK) and the Midland Symphony Orchestra (MI), Tchaikovsky Concerto No. 1 with Brazil’s Orquestra Filarmonica do Espirito Santo as well as the Symphony of Northwest Arkansas, Rachmaninoff Concerto No. 3 with the Delaware Symphony Orchestra, Beethoven Triple Concerto with Taiwan’s Evergreen
Symphony, Prokofiev Concerto No. 3 with Brazil’s Orquestra do Curitiba, and Beethoven Choral Fantasy and World Premiere of Jeremy Gill’s Work with the Mendelssohn Club of Philadelphia and Black Pearl Chamber Orchestra in Philadelphia. In addition to numerous recital engagements in the US, Europe and Taiwan, she also collaborates in Philadelphia presenting aware-winning composer Jennifer Higdon’s works, in Germany with the Szymanovski String Quartet (Schubert), in Taiwan with her mentor, pianist Sergei Babayan, playing four-hands piano
music of Prokofiev, and in piano four-hands reduction of the Brahms German Requiem with Germany’s Audi Youth Choir, Taipei Male Choir, and conductor Jean-Pierre Faber.

Ching-Yun Hu was born in Taipei. She made her concerto debut at age 13 with the Poland Capella Cracoriensis Chamber Orchestra on tour in Asia, and moved to the US a year after to continue her music studies at The Juilliard School in New York. She worked with Sergei Babayan, Karl-Heinz Kammerling and chamber music with Joseph Kalichstein and Seymour Lipkin. Additionally, she has received artistic guidance from Richard Goode and Murray Perahia. The Cultural Minister of Taiwan gave her an honorary prize in 2008 recognizing her achievements. Besides performing, Ms. Hu is an keen advocate in promoting classical music. She founded the Yun-Hsiang International Music Festival (www.yunhsiang.org), an bi-annual music festival in Taipei, inviting some of the most sought after artists on international concert stage to perform at prestigious concert halls in Taiwan and to work with aspiring young Taiwanese musicians. (www.chingyunhu.com) August 2012