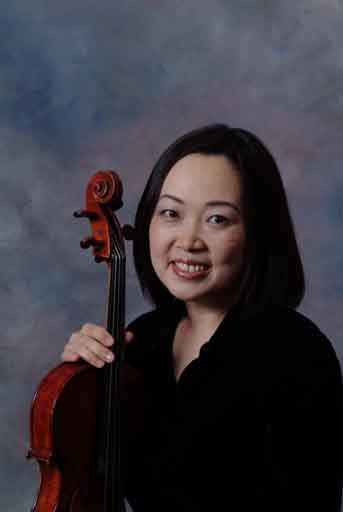 Violist Caroline Lee has performed throughout the US and Canada as an orchestral player as well as a chamber musician and recitalist. She is currently a member of the San Francisco Ballet orchestra and also performs regularly as a sub with the San Francisco Opera Orchestra, Chicago Symphony, and the Philadelphia Orchestra.

Before relocating to the Bay area, Caroline was a member of the Kansas City Symphony for eight years. She also performed with the Kansas City Chamber Orchestra as principal violist and New Ear Ensemble, an ensemble dedicated to performing music written by living composers. An active chamber musician, she has performed in Banff, Domaine Forget, and the International Musical Arts Festivals, collaborating with members of the Tokyo, Cleveland and Colorado quartets, as well as artists such as Eric Friedmann, Steve Dann, Ian Swensen, and Richard Stolzman. Along with her sister Aeri, Caroline formed the Lee duo and performs recitals throughout north America, championing less familiar viola repertoire. She is also member of Eos Ensemble, performing a wide range of works for chamber ensemble within the SF bay area.

Caroline received her bachelor in music degree at the University of Michigan and her masters and Artist Diploma at Yale School of Music. She currently lives in Oakland with her husband and two children.