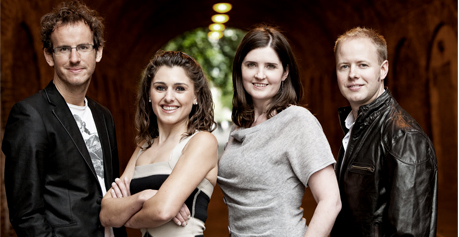 The Carducci Quartet is recognised as one of today’s most successful young string quartets. Based in the UK, the quartet holds residencies at Cardiff University and Dean Close School and is visiting quartet in residence at Trinity Laban in London, Repton School and the Cork School of Music in Ireland. Regulars at London’s Wigmore Hall, they perform throughout the UK, including their own festival in Highnam, Glos.

Winners of many competitions at home and abroad, the Anglo-Irish Carducci quartet has established an enthusiastic international following with over 90 concerts worldwide each year. Recent tours have taken them to Spain, Ireland, Colombia, Australia and the USA, including New York, San Francisco and Los Angeles . Other appearances include at Carnegie Hall, Washington Library of Congress, Tivoli Concert Hall, National Concert Hall, Dublin and the Verbier, West Cork and Wratislavia Cantans Festivals.

Among the highlights of 2012 will be the world premiere of new commissions by John McCabe and Michael Berkeley, a new recording for Naxos, performances at the Cheltenham International and Presteigne Festivals and tours of Columbia, USA and Holland. The Carducci Quartet’s success includes an Aldeburgh residency, broadcasts for BBC Radio 3, RTE Lyric FM and BBC television, a cycle of the complete Bartok quartets and a Naxos recording of the Philip Glass quartets. They have received wide critical acclaim for recordings on their own record label ‘Carducci Classics’, launched with a CD of Haydn Quartets. Other recordings include two world premiere recordings featuring C20th works by G. Whettam (‘recording of the month’ MusicWeb International) and J. Horovitz (‘beautifully crafted works…excellent performances’, BBC Music Magazine) and their latest disc featuring quartets by Mendelssohn and Franck. They have also recorded Vivaldi and Piazzolla with the Katona Twins Guitar Duo for Channel Classics.The quartet studied with members of the Amadeus, Alban Berg, Chilingirian, Takacs and Vanbrugh quartets and, as part of the ProQuartet professional training programme in France, with Gyorgy Kurtag, Walter Levin and Paul Katz. Passionate about taking classical music to the next generation, the Carducci Quartet runs chamber music courses for young musicians in the UK, France and Ireland. Their educational work includes performances for school children supported by their own trust, the Carducci Music Trust, the Cavatina Chamber Music Trust and West Cork Music and they also regularly coach on the National Youth String Quartet Weekend, run by the London String Quartet Foundation at Chetham’s School of Music. They were nominated for a 2011 Royal Philharmonic Society Award for their family concert ‘Getting the Quartet Bug!’.
Our Next Concert