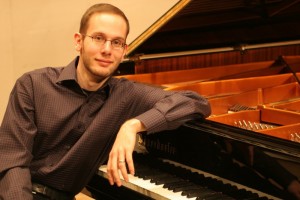 Described as a “sensitive musician with an ear for color” by the Cincinnati Enquirer, pianist Brendan Kinsella’s recent concert engagements have taken him to New York, Chicago, Los Angeles, San Francisco, Holland, Italy, and other cities throughout the United States, Europe, and Asia.  He earned his Bachelor (with honors) and Master of Music degrees at the University of Cincinnati College-Conservatory of Music as a pupil of Frank Weinstock (with additional coaching from James Tocco and Kenneth Griffiths) and in 2008 received his Doctor of Musical Arts degree from the University of Missouri-Kansas City as a student of Robert Weirich.  In master classes, he has performed for artists such as Christopher Elton, Susan Graham, Martin Katz, Ani Kavafian, Anne-Akiko Meyers, Frederic Rzewski, Andre-Michel Schub, Peter Serkin, David Shifrin, and the Takacs Quartet.  He completed his training as a Solo Piano Fellow at the Music Academy of the West, working under the guidance of Jerome Lowenthal, Professor of Piano at the Juilliard School.  In 2010, he debuted as a soloist in Carnegie Hall’s Weill Recital Hall and was a featured concerto soloist at the prestigious Midwest Clinic in Chicago.

Kinsella has appeared in concerti ranging from Beethoven to Brahms to Barber with the Kentucky Symphony, the Jefferson City Symphony, the CCM Chamber and Concert Orchestras, the UMKC Conservatory Orchestra, and the UMKC Wind Symphony in collaboration with conductors Xian Zhang, Steve Davis, and Robert Olson.  As a collaborative pianist, he has performed both as an orchestral pianist and in duo-recitals with members of the New World Symphony, the Cincinnati Symphony Orchestra, the Cincinnati Chamber Orchestra, the Omaha Symphony, the Dayton Philharmonic, the Kansas City Symphony and Lyric Opera, and in recital with artists such as Benny Kim, Carter Enyeart, Daniel Saenz, and his wife, Shoko.  Since 2010, he has coached and performed as a Guest Artist in Collaborative Piano at the soundSCAPE Composition Festival in Maccagno, Italy.

A noted interpreter of all things dissonant, Kinsella’s all-contemporary recitals featuring the works of living masters and emerging voices have garnered wide acclaim.  Of a performance of Rzewski’s De Profundis in Montecito, the Santa Barbara Daily Sound remarked that “Kinsella’s performance was truly astonishing, as he missed nary a beat nor tripped over any words. The sense of terror, misery, despair, disdain, and righteous anger was palpable, and the essay is ultimately life-affirming if horrifying…I’m glad to have heard it, especially by such a passionate and gifted pianist who clearly believed in his mission.”  The Kansas City Star declared that his performances of George Crumb’s chamber repertoire were “marvelous…he displayed convincing tonal colors, impressive technique, and incisive rhythms.”   Utrecht’s Le Bon Journal recently described a 2011 solo recital of Beethoven, Rzewski, Liszt, and Poulenc as characterized by the “indestructible force and optimism that Americans can radiate proverbially.”

Among Kinsella’s experiences as a lecturer and visiting artist at festivals and universities include engagements at the 2011 College Music Society South Central Conference, the 2010 Cal State Fullerton New Music Festival, the University of Wisconsin-Madison School of Music, the SUNY Fredonia School of Music, the University of Iowa School of Music, and many others.  His seminar topics have included lectures on recent developments in American music, the influence of Greek philosophy on Olivier Messiaen’s piano music, and studies on the evolving role of the collaborative pianist in selected chamber repertoire.  Presently, he serves as Assistant Professor of Piano and Collaborative Piano at the University of Texas-Pan American where he teaches applied piano, chamber music, and vocal coaching.  Before joining the faculty at UTPA, he was as a member of the piano department at Missouri Western State University and held graduate assistantships in piano and collaborative piano at CCM and UMKC.

Born 1980 in Cincinnati, Ohio, Kinsella began playing the piano at age 11 and made his concerto debut at 15.  A live recording of his performance of Messiaen’s Oiseaux Exotiques at the Midwest Clinic is commercially available from the MarkRecords label, and his recording of Narong Prangcharoen’s Bencharong will be available on Albany records in 2012.  His upcoming performances include a series of all-Liszt recitals in celebration of the composer’s bicentennial.