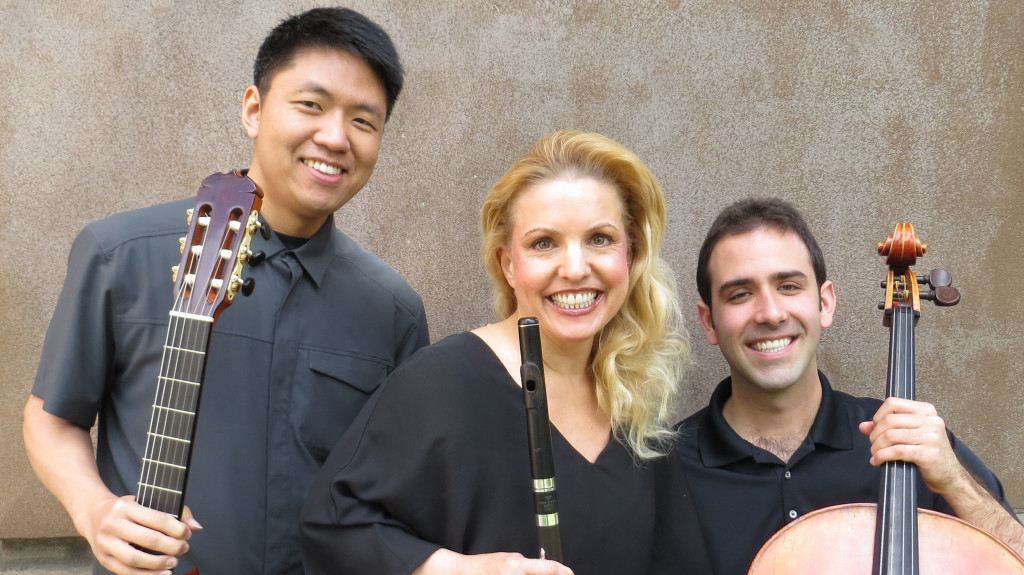 As the only ensemble dedicated to music for flute, cello, and guitar, Black Cedar is devoted to creating the new, discovering the neglected, and re-imagining the old works for this unique combination. Their debut album will be released this coming May.

Their new creations include commissioning Of Emblems by San Francisco’s Garrett Shatzer in 2014 with a grant from San Francisco Friends of Chamber Music, plus commissioning Miscellaneous Music by Bay Area composer Durwynne Hsieh in 2015. Black Cedar’s 2016 commission, Songs of New Peoples by Mark Fish, will honor the unique diversities of Silicon Valley with a multi-movement suite developed from Chinese, Korean and Indian folk melodies.

Black Cedar re-imagines the old masters with their own arrangements of works such as Mozart’s Grand Trio, Nicolo Paganini’s Terzetto, Bach’s E Minor Flute Sonata, and Gabriel Fauré’s Pavane. And, they delve into the folk music idiom with their own renditions of the old Appalachian folk tune House Carpenter, the old English tune Fortune My Foe, and Astor Piazzolla’s lovely Tanti Anni Prima.

Black Cedar is pleased to welcome their newest member to the trio, Isaac Pastor-Chermak, principal cellist of the Waterloo-Cedar Falls Symphony in Iowa. Isaac is also a member of the Dayton Philharmonic in Ohio, the West Virginia Symphony, the Monterey Symphony, and the Santa Cruz Symphony. This consummate soloist is an enthusiastic practitioner of contemporary music with nearly two dozen commissions and premieres of new chamber works, and he is equally at home as an early music performer on baroque cello and viola da gamba, having appeared at the Berkeley Early Music Festival, the American Bach Soloists Academy in San Francisco, and at Longy’s International Baroque Institute in Massachusetts.

Guitarist Steve Lin has concertized throughout the United States, Italy, the Philippines, and Taiwan. He is acclaimed by Classical Guitar Magazine as “a confident player with a powerful sound, quick hands, and a solid musical memory” and praised by American guitar virtuoso Eliot Fisk as a performer who “plays with an innate and uncommon elegance.” Steve is the guitar professor at San Jose State University, and he was the first prize winner at the 2006 Boston GuitarFest Competition and the 2001 East Carolina University Guitar Competition. He has performed at the Mérida Yucatán Guitar Festival, Yale Guitar Extravaganza, L’Accademia Musicale Chigiana, ChitarraImperia Festival, and the Stetson Guitar Workshop. A recording artist for VGo Recordings, Steve has released two albums, Eliot Fisk Series Vol. 1, dubbed “innovative and exciting” by Minor 7th Acoustic Guitar Music Reviews, and Imagen, which Classical Guitar Magazine called “brilliant and virtuosic.”

Steve Lin performs on a cedar guitar made in 1971 by Jose Ramirez. Kris Palmer performs on a grenadilla wood flute made by Verne Q. Powell in 2002. Isaac Pastor-Chermak plays on an 1810 Gennaro Fabricatore cello, generously on loan from a private collector, and a modern bow from the workshop of Ole Kanestrom in Port Townsend, Washington. He performs Baroque repertoire on a 1982 five-string cello by Antonius Rosius.