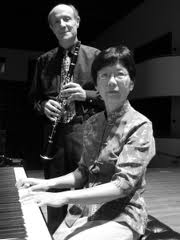 Betty Woo received her D.M.A. degree from Stanford University. She also undertook graduate studies at the Royal Academy of Music in London, where she received a recital diploma and the MacFarren Gold Medal, the highest honor for a pianist. Betty Woo has made major appearances in London and New York, received a special prize for the best performance of a twentieth-century piece in the Gina Bachauer International Competition, and a special award in the International American Music Competition. Ms. Woo has also performed, taught masterclasses and gave lectures in Beijing, Shanghai and Hong Kong as well as locally. She has made numerous recital and concerto appearances throughout California. Recently she has collaborated with the Paul Taylor Dance Company in San Francisco, Seattle and Paris, in their performances of Stravinsky’s Rite of Spring for two pianos.

As a chamber music player, Betty Woo has performed with the oboist Heinz Holliger, with members of the San Francisco Symphony, and with the cellist Jennifer Culp. She has also participated in the Olympic Music Festival in Washington, and Music in the Mountain Summer Festival in Grass Valley. As a champion of contemporary music, Ms. Woo has given many premiere performances both as a soloist and with such contemporary ensemble groups as the Earplay and the San Francisco Contemporary Chamber Players.

Ms Woo is also an experienced teacher, currently on the faculty of Holy Names University in Oakland and University of California, Berkeley. She frequently gives lectures to various music teachers associations, and judges in many local and state competitions.