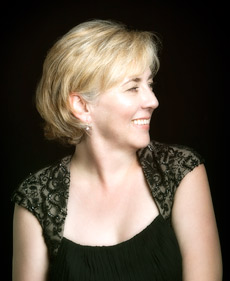 Bernadene Blaha’s “brilliant command of the piano”, whether featured as recitalist, concerto soloist or chamber musician, has been heralded in performances throughout North America, Europe, Asia and Mexico.  This season’s highlights include her debut performances in Australia and at the Concertgebouw in Amsterdam, as well as an invitation to serve as a jury member at the prestigious 2010 Gina Bachauer International Artists Piano Competition in Salt Lake City, Utah.

In the summer of 1999, Ms. Blaha was invited by Canada’s “Piano 6″ to perform with the group in televised gala concerts in Lanaudiere and in Ottawa at the National Arts Centre.  She remained an active touring member of the project through the completion of it’s ten year mandate in 2003.

Ms. Blaha’s first solo CD featured the piano music of Chopin. Piano & Keyboard’s review referred to her as ” a pianist of integrity, with lovely sonorities and total clarity of line.  She understands and respects Chopin and lets his eloquence speak for itself.”  Her discography also includes a CBC Records CD of Sonatas by Strauss, Debussy, and Barber with cellist Shauna Rolston and an album of the complete works of Schumann with violist Rivka Golani.  Her most recent CD of the complete works of Felix Mendelssohn for Cello and Piano with cellist Elizabeth Dolin was released on the Analekta label.

Born in Brantford, Ontario, Ms. Blaha was a scholarship student of Boris Berlin at the Royal Conservatory of Music in Toronto and of Mme. Ania Dorfmann at the Juilliard School where she graduated with a Bachelor and Master of Music Degree. Her other mentors included: Marek Jablonski, Menahem Pressler, Gyorgy Sebok and Ludwig Stefanski.

Ms. Blaha currently resides in Los Angeles, and since 1993 has been a member of the Keyboard Faculty at the Thornton School of Music, University of Southern California.