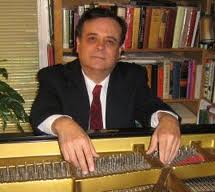 Antonio Iturrioz was born in Cuba and came to the United States when he was 7 years old. He played his first concert at age 9 and made his orchestral debut at age 15 playing the Liszt First Piano Concerto. His teachers include his father, Pablo Iturrioz, Francisco De Hoyos (a pupil of Gyorgi Sandor), Bernardo Segall who studied with Alexander Siloti who was a pupil of Liszt, Aube Tzerko and Julian White. In 1971 he took several master classes from Byron Janis. In 1972 he participated in the Aspen Music Festival, and in 1973 he was one of ten young pianists selected nationwide by Andre Watts to participate in the Andre Watts Piano Seminars at Tanglewood. He is a recipient of the Los Angeles Young Musicians Foundation Scholarship.

In 1973, just before Tanglewood, he fell while jogging and injured his right hand. At the time, the extent of the injury was not apparent, and after Tanglewood he continued to play recitals. Hiding his hand injury, he moved to Los Angeles to study with Bernardo Segall. While preparing for the 1977 Cliburn Contest, 10-12 hours a day at the piano began to take its toll on his right hand, and Iturrioz dropped out of the Cliburn competition to seek medical attention. In the spring of 1977 he had surgery on his right hand.

It was 3 years before he could play again with both hands. During these difficult years he tackled almost the entire left hand piano repertoire including all of the Leopold Godowsky left hand arrangements and compositions. Encouragement from family and friends, most particularly from the late Marina Derryberry (Jon Nakamatsu’s teacher) kept Iturrioz on the path to complete recovery. His repertoire ranges from Scarlatti to present day composers. He plays the complete piano works of Robert Schumann and has a special affinity for the five Rachmaninoff works for piano and orchestra. He recently added a new body of Godowsky works to his repertoire, both original and arrangements. Several contemporary composers have written works for Mr. Iturrioz.