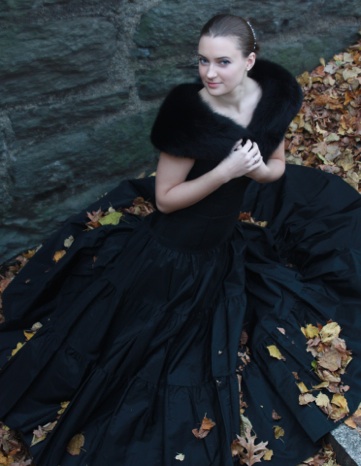 Hailed by The New York Times as a pianist of “a fiery sensibility and warm touch” , Anna Shelest is an international award-winning pianist who has thrilled the audiences throughout the world. Her recent engagements included debuts at Alice Tully Hall in New York City, Stern Auditorium at Carnegie Hall in New York City, and The Kennedy Center in Washington DC.

Born in Kharkiv, Ukraine Ms. Shelest began her piano studies at the age of six. She attended the Kharkiv Special Music School for Gifted Children, where she was a student of Gary Gelfgat and later of Sergei Polusmiak.  At the age of eleven she performed at the UNESCO Headquarters in Paris as the youngest prize winner of the Milosz Magin International Piano Competition.

Ms. Shelest has performed on some of the world’s greatest stages such as Carnegie Hall in New York City, The Kennedy Center in Washington DC, Great Hall of Moscow Conservatory and Palacio de Bellas Artes in Mexico City.

As an international recitalist, she has performed in Canada, France, Japan, Mexico, Netherlands, Russia, Ukraine, South Africa and the United States. Her chamber music collaborations include performances with the Amernet String Quartet, Cincinnati ARC Ensemble, and musicians from the Cincinnati Symphony Orchestra. In June 2011 she was the first one to present a recital at the newly rebuilt 7 World Trade Center in New York City.

Shelest’s repertoire ranges from the Baroque to today’s contemporary composers.  Streaming from her special affinity toward Russian piano repertoire, she released her first solo CD of Rachmaninoff music entitled: Etudes-tableaux op. 39 and Moments Musicaux op. 16.  (Classical Records. Moscow).  She has also collaborated with Cristian Ganicenco, principal trombonist of Cincinnati Symphony Orchestra on the CD  “Beyond Oblivion” featuring music for trombone and piano. Shelest’s new CD featuring Mussorgsky Pictures at an Exhibition as well as works by Tchaikovsky and Glinka was released in February of 2011.

Having received her Masters Degree at The Juilliard School in the class of Jerome Lowenthal, Ms. Shelest currently resides in New York City. Her previous teachers included Sergei Polusmiak at Northern Kentucky University where she was a recipient of numerous scholarships and awards including a Corbett Scholarship, the Regents Award, and recognition as an Outstanding Senior in the College of Arts and Sciences, as well as private studies with Eugene and Elizabeth Pridonoff  of  University of Cincinnati College Conservatory of Music.