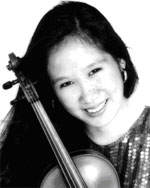 Alicia Yang leads an active and varied career as both an historically-informed specialist and a modern violinist. Recently moved to the Bay Area, she is looking forward to performances with American Bach Soloists, Philharmonia Baroque Orchestra and San Francisco Bach Choir this season. Next summer will take her to Carmel for the Bach Festival for her tenth season.  Ms. Yang has performed with the Seattle and Portland Baroque Orchestras, the Washington Bach Consort, and the Smithsonian Chamber Players, among other ensembles. She has also programmed educational concerts on the history of the violin and its repertoire, with support from the Early Music Guild of Seattle. Ms. Yang was chosen to perform on an Oberlin Historical Performance Program concert at the Boston Early Music Festival. She is a graduate of Oberlin College and received her Master’s degree from the New England Conservatory. On the baroque violin, Ms Yang has studied with Marilyn McDonald, Stanley Ritchie, and Sigiswald Kuijken. She enjoys performing chamber music with her husband, San Francisco Symphony Assistant Principal Cellist Amos Yang, and is mother to two young children, Isabel and Noah. Ms. Yang performs on a 1762 Richard Duke violin.