On August 28th at 3:00 PM Noontime Concerts in association with the Living Heritage Foundation is thrilled to present “Majesty of the Spiritual”, a trans-figurative musical experience, an opening of the heart and soul that reveals the Spiritual as a continually evolving art form, as deeply rooted in the present as it is in the past.

The program features 12 award-winning singers from the great opera houses of the world joined by the legendary Frederica von Stade singing the works of three living African American composers, Lena McLin, Roland Carter, and Jacqueline B. Hairston. The event will also feature a film component highlighting each composer.

Curated by Robert Sims, baritone, “Majesty of the Spiritual” is an intimate gathering of mighty forces, much more than simply a musical concert, “Majesty of the Spiritual” is a testimony in music to the indomitable will that navigated an impossibly tragic, unforgettable past, and a vivid demonstration of musical lineage and poetic tradition, dynamic and powerfully alive today. 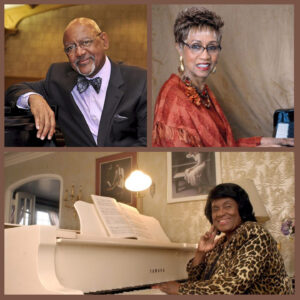 Emerging from a long continuum of musical creativity, the African American spiritual is a distinctive genre in that it is a uniquely American musical tradition. While the combination of African enslavement and Protestant Christianity existed in many other geographical locations, it was only in the United States that spiritual developed. It is from this genre that other important African-derived musical traditions sprang including the blues, jazz, gospel music, rhythm and blues, and other important expressions.

It was the likes of musical pioneers like Harry T. Burleigh, Roland Hayes, and Paul Robeson, who established an art music tradition for the genre through their performances, compositions and arrangements. Their efforts began yet another tradition which continues today. African American concert vocalists including Dorothy Maynor, Todd Duncan, Inex Matthews, William Warfield, Robert McFerrin, Shirley Verrett, Florence Quivar, Jessye Norman, and Benjamin Matthews are among many great interpreters of the art form. They have contributed to it becoming recognized along with German lieder, French melodie, and other art song traditions from Italy, Russia, and Spain.

My interest in African American spirituals was inspired by my high school music teacher, Dr. Lena McLin. I learned many spirituals sitting next to her as she composed and arranged at the piano. It is my hope that young musicians will explore this vast repertoire, and not just sing the most popular twenty-five spirituals known by many. Voice students should approach this music with the same reverence and seriousness that they would an opera aria or art song by a European composer.

I was privileged to witness Benjamin Matthews and William Warfield give full spiritual recitals in the 1990’s and between 1999 and 2002, was honored to join them in concert as a part of an ensemble, “Three Generations” (a trio singing spirituals).

Majesty of the Spiritual represents the perpetuation of a long and proud tradition. I am honored and humbled to make this possible.

Wait ’til I Put On My Crown arr. Lena McLin

Don’t You Let Nobody Turn You ‘Round arr. Lena McLin

Is There Anybody Here Who Loves My Jesus arr. Roland Carter

God is a God arr. Jacqueline B. Hairston

This Little Light of Mine arr. Jacqueline B. Hairston

My Good Lord’s Done Been Here arr. Jacqueline B. Hairston 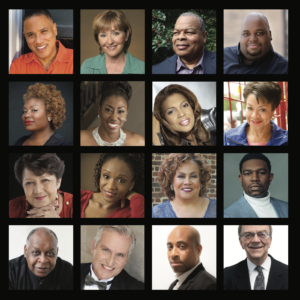 Lena McLin
Lena McLin is recognized as one of America’s foremost composers of vocal and choral works. She has written more than 400 compositions including cantatas, symphonies and art songs, making her one of the most prolific African-American women composers of the 21st century. She is published by Neil A. Kjos Music Company.

McLin’s compositions have been performed throughout Europe, Asia, Africa, and the United States. Her cantata, Free at Last (a tribute to her childhood friend Dr. Martin Luther King Jr.) received performances at New York’s Carnegie Hall with the American Symphony Orchestra. It was subsequently performed by the Icelandic Symphony, the Estonia Philharmonic, the Finnish National Opera Orchestra, the Savannah Symphony, the Minnesota Sinfonia, and Opera Ebony. Lena McLin’s composition, Makers of the History was commissioned and performed by the Opera Theater of Saint Louis and her composition “I’m a Soldier” was commissioned and premiered by Robert Sims with the Mormon Tabernacle Choir and Orchestra.

Lena McLin is a graduate of Spelman College and did graduate studies at the American Conservatory of Music and Roosevelt University. She taught music in the Chicago public high schools for 36 years, cultivating hundreds of young musicians. Her contributions to education, music and American culture have been recognized by her receipt of the Outstanding Teacher Award from the Chicago Public Schools and honorary doctorates from Spelman College and Virginia Union University.

Roland Carter
Distinguished composer, conductor, educator, and pianist, Roland Carter is the Ruth S. Holmberg Professor of American Music in the Department of Music at the University of Tennessee at Chattanooga (UTC). His accomplishments as a leading figure in the choral arts include concerts with major choruses and orchestras in prestigious venues nationwide; as well as lectures, workshops, and master classes. From presidential inaugurations to the smallest church, from scholarly presentations for national gatherings of musicians, educators, and preservationists to private coachings with individual singers, Mr. Carter lends his keen ear, bright mind, and talented hands to projects of every sort.

Dr. Carter has served on National Endowments for the Arts Heritage Access and Choral Panels and received an honorary Doctor of Music degree from Shaw University. He was one of the 2003 Tennessee Governor’s Arts Awards in the Distinguished Artist category. In 2004, he was elected to honorary membership of the internationally acclaimed Morehouse Glee Club, joining the ranks of only two other musicians so honored– Robert Shaw and Leonard DePaur. Historic Abyssinian Baptist Church (NY) honored Carter with a program of his arrangements and composition in July 2005. For his outstanding contributions to American Music, he was given honorary membership in the nation’s largest music fraternity, Phi Mu Alpha Sinfonia and elected to the charter class of Signature Sinfonians. Most recently, he served as guest conductor of the 2008 Yale University High School Festival, and his arrangements were featured in a special recognition program by the 175th Anniversary committee of the Metropolitan AME Zion Church of Hartford, CT. In summer of 2009, The Chamber Choir of the University of Tennessee at Chattanooga, under the direction of Dr. Kevin Ford, released the Volume I of The Choral Music of Roland Carter.

Carter, having produced and appeared on programs for national and international radio and television networks, is noted, especially, as an authority on the performance and preservation of African American music. He is founder and CEO of Mar-Vel, a music publisher specializing in the music of African American Composers and traditions. Carter has directed the Chattanooga Choral Society for the Preservation of African American Song for 19 years, and served music advisor and principle guest conductor of the Houston Ebony Opera Guild, Houston, TX for twelve years. Unquestionably gifted composer-arranger, it is Carter’s arrangement of “Lift Every Voice and Sing” that is most often used to present the anthem in formal settings. His arrangements and settings have and continue to be performed by orchestras and choirs throughout the world. A colleague of his once shared her belief that the angels sat upon his shoulders and whispered the score for his arrangement of the spiritual, In Bright Mansions Above.

In addition to performance and academic pursuits, Carter has served on several boards including the Tennessee Arts Commission, the Southern Arts Foundation, National Assembly of State Arts Agencies, Allied Arts of Greater Chattanooga. Chattanooga African American Museum/Bessie Smith Hall, and the National Association for the Study and Performance of African American Music. Presently he sits on the boards of the League of American Orchestras, the Chattanooga Symphony and Opera Association, and is an honorary member of the board of directors of the Negro Spiritual Foundation, Orlando, FL, and the African American Music Foundation, San Diego, CA. Carter recently completed his sixth and final year as president of the National Association of Negro Musicians, Inc., the nation’s oldest organization committed to the performance and preservation of African American music. He serves the music ministries of the Cascade United Methodist Church (Atlanta, GA) and the Christian Faith Baptist Church (Raleigh, NC).

Jacqueline B. Hairston
Jacqueline Butler Hairston is an award-winning ASCAP composer-arranger, pianist, music educator, and vocal coach. Originally from Charlotte, NC and formerly of the San Francisco Bay Area, she currently resides in Sacramento, CA. Jacqui received her pre-college music education from The Juilliard School, her Bachelor’s degree from Howard University (B.Mus.Ed.) and her Masters from Columbia University (Mus. Ed.).

Twice-invited as a guest conductor to present her own works at Carnegie Hall in 2012 and in 2016, Hairston has won numerous other honors — among them The Keeper of the Spiritual Award from Friends of Negro Spirituals (Oakland, CA), The Lifetime Achievement Award from the Living Heritage Foundation (Sacramento, CA), and the San Francisco (Channel 5-TV) Jefferson Award as Preserver of the Negro Spiritual, a title she resurrected from her acclaimed cousin, Dr. Jester Hairston.

Renowned soprano Kathleen Battle has presented Hairston’s works in recital and recorded her arrangements in her Grammy- Award-winning CD with Christopher Parkening. Most recently she has included them in her acclaimed, touring Underground Railroad concerts since 2011. A host of acclaimed, international orchestras and artists have performed Hairston’s works, among them include, The London Symphony, The Mormon Tabernacle, The Oakland Symphony, The Metropolitan Orchestra of Lisbon, William Warfield, Denyce Graves, Grace Bumbry, Robert Sims, Louise Toppin, Susheel Bibbs, and Darryl Taylor.

Jacqui’s life and compositional style have now been captured in a book by Phillip Harris, entitled Songs and Spirituals: The Life and Music of Jacqueline Hairston, and in her first published volume of songs and spirituals is available at this concert and through Classical Vocal Reprints.