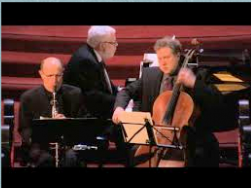 Clarinetist Tom Rose received a B.A. from San Francisco State University and a Masters in Performance from Mills College. His principal teachers were Earl Smith, Leon Russianoff, and Rosario Mazzeo. He taught music in the Oakland and Berkeley Public Schools from 1973-1980. As a professional musician, he has been a member of several symphony orchestras, and a freelance musician in the bay area for over 35 years. He has held the position of Principal Clarinetist with Music in the Mountains Festival, Grass Valley, since its founding, in 1982. He has performed the Copland and Mozart clarinet concertos numerous times with the orchestra, along with other solo works. He worked at San Francisco Ballet from 1988 through June 2010, serving as Orchestra Personnel Manager. In 2004 he released a CD of music for clarinet and piano with pianist Miles Graber. The second CD in this series is due for release in 2013. Mr. Rose is an adjunct clarinet teacher at Holy Names University.

Michael Graham is a member of the Oakland Symphony and the Adorno Ensemble, ensemble-in-residence at Santa Clara University. He also appears frequently with performing groups throughout the San Francisco area, including New Century Chamber Orchestra, Opera San Jose, the Santa Rosa Symphony, the San Francisco Opera Center, The Chamberlin String Quartet, as a guest with Quartet San Francisco, and in numerous Best of Broadway show and recordings

Miles Graber received his musical training at the Julliard School, where he studied with Anne Hull, Phyllis Kreuter, Hugh Aiken, and Louise Behrend. He has lived in the San Francisco Bay Area since 1971, where he has developed a wide reputation as an accompanist and collaborative pianist for instrumentalists and singers. He has performed with numerous solo artists, including Sarah Chang, Cho-Liang Lin, Camilla Wicks, Axel Strauss, Mimi Stillman, Judith LeClair, Martha Aarons, and Lev Polyakin. Mr. Graber performs frequently with violinists, Mariya Borozina and Christina Mok; flutists Gary Woodward, Amy Likar, and Ai Goldsmith; and clarinetist, Tom Rose. He is a member of the chamber groups, Trio Concertino, MusicAeterna, GGR Trio, and Sor Ensemble; as well as the new music group, Sounds New.