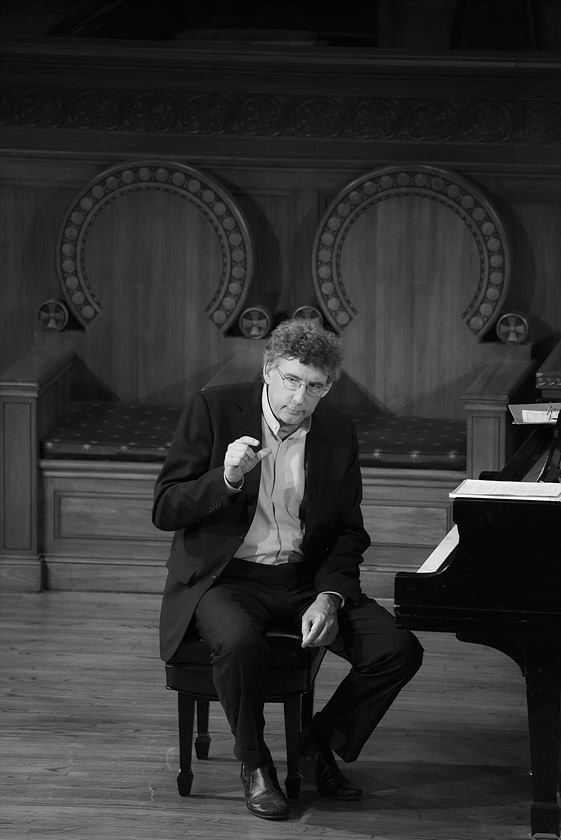 Thomas Schultz has established an international reputation both as an interpreter of music from the classical tradition – particularly Bach, Beethoven, Schubert and Liszt – and as one of the leading exponents of the music of our time. Among his recent engagements are solo recitals in New York, San Francisco, Berlin, Paris, Ghent, Seoul, Taipei and Kyoto, and at the Schoenberg Festival in Vienna, the Piano Spheres series in Los Angeles, Korea’s Tongyoung Festival, the Festival of New American Music in Sacramento and the April in Santa Cruz Festival. He has also appeared as a soloist at the Other Minds Festival in San Francisco, and in chamber music performances with the San Francisco Contemporary Music Players, the Da Camera Society of Houston, Robert Craft’s 20th Century Classics Ensemble, and the St. Lawrence String Quartet. In 2005, 2010, and 2014 he gave masterclasses on the piano music of the Second Viennese School at the Schoenberg Center in Vienna. He is currently performing the complete piano works of Schoenberg and making a set of videos of these performances accompanied by lectures on the music.

His recitals are notable for programming that celebrates the continuing vitality of the piano repertoire, juxtaposing the old and the new. He has worked closely with such eminent composers as Cage, Feldman, Wolff, Rzewski, Earle Brown, Jonathan Harvey, Hyo-shin Na and Elliott Carter (in performances of the Double Concerto at the Colorado Music Festival and at Alice Tully Hall in New York).

His recording of Stravinsky’s Concerto for Two Solo Pianos is on the MusicMasters label; he can be heard in chamber works of Earle Brown on a Newport Classics recording and his recordings of works by the Korean composer Hyo-shin Na on CDs from the Seoul and TopArt labels have received special recognition. His solo CDs, (a double cd of the Goldberg Variations of Bach and Rzewski’s The People United Will Never Be Defeated and a cd of works written for him by Takahashi, Buckinx and Wolff) are on the Wooden Fish label. Schultz’s recording of Christian Wolff’s Long Piano was released in 2009 by New World Records.

Schultz’s musical studies were with John Perry, Leonard Stein and Philip Lillestol. He has been a member of the piano faculty at Stanford University since 1994.

“This was a fine undertaking, equally impressive for its thoughtful planning and for its strong, fearless execution. Schultz brought a depth of feeling to the music that gave even the splashiest passages an undercurrent of soulfulness. To dispatch Rzewski’s extraordinary masterwork with the sort of fiery elegance and formal command that Schultz brought to the piece is another order of achievement entirely.”

“Schultz cuts a tall, imposing figure, and although he can fire the big technical guns at will, he seemed to be most interested in color, in exploiting the massive range of the Fazioli piano in a sympathetic hall. These qualities were immediately put on display in a strikingly characterized performance of Karlheinz Stockhausen’s Klavierstück IX….He captured the unrelenting driving elements of Rzewski’s piece but also produced a variety of colors that went beyond even the composer’s own virtuosic performance on record.”

“A sensation… a stunning program… these were sterling performances of quality scores written between 1919 and the present. Schultz is the master of an enviable keyboard technique that is nourished by an incisive intellect. He’ s an impressive artist who makes clear that technique alone does not lead to a satisfactory performance of contemporary music; the instinctive musicality that Schultz brings to his work is equally important.”