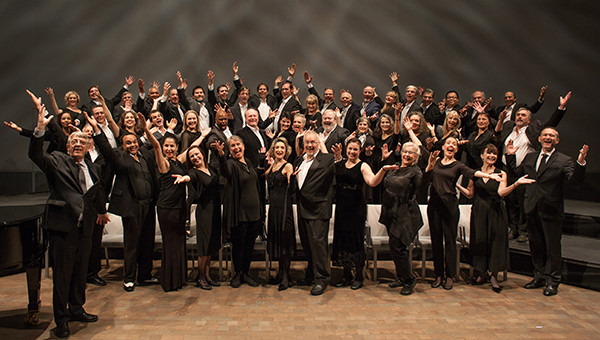 American Folk arr. Gwyneth Walker: How Can I Keep from Singing?

Jerry Bock: “Tradition” from Fiddler on the Roof

Company Chorus Director and conductor Ian Robertson joined San Francisco Opera in 1987 and has prepared the Opera Chorus in more than 300 productions. In recognition of his work and artistic guidance, Robertson was awarded the San Francisco Opera Medal, the Company’s highest honor, in 2012.

Fabrizio Corona has served as associate chorus master with San Francisco Opera since 2011.  Before joining the Company, he was a vocal coach and assistant chorus master at Festival Pucciniano in Torre del Lago; Teatro Massimo Bellini in Catania, Sicily; Chigiana Musical Academy in Siena; Stuttgart Opera; and Opéra de Monte-Carlo.  Born in Rome and raised in Tuscany, Corona trained in piano and art song at the Luigi Cherubini Conservatory in Florence, followed by studies at the Académie Francis Poulenc in Tours under the guidance of baritone François Le Roux and several master classes on lieder interpretation with American pianist Irwin Gage.

THE SAN FRANCISCO OPERA CHORUS was established in 1927 by General Director Gaetano Merola who also served as the ensemble’s director through 1943.  As part of General Director Kurt Herbert Adler’s development of the Company, the Chorus became full-time in 1981, working a minimum of 31 weeks, typically from March through early December.  The current chorus consists of two groups:  the 45-member Regular Chorus with 22 men and 23 women and the Extra Chorus, which can expand the ensemble to 100 singers or more in larger operas. The Opera Chorus was the subject of the 1992 Academy Award-winning feature-length documentary In the Shadow of the Stars and has been featured in numerous video presentations, beginning in 1979 with an international live telecast of La Gioconda and continuing with recent DVD releases of Mefistofele, Porgy and Bess, and Show Boat.  The Opera Chorus is represented by its union, the American Guild of Musical Artists (AGMA).