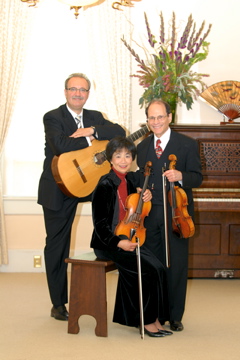 The Paganini Trio ensemble is unique in the world of music.  The name itself evokes memories of the most brilliant virtuoso of all time, Nicolo Paganini who was a famed violinist, violist, guitarist, and composer.  The Paganini Trio, with Joseph Gold, violinist; Debbie Dare, violist; and Jaume Torrent, guitarist, and composer, has played concerts in countless venues.  From ancient castles and elegant concert halls to universities and international music festivals, audiences applaud them enthusiastically.

Their repertoire is vast and innovative.  It includes the music of established masters as well as music composed expressly for the Paganini Trio.  Many of Jaume Torrent’s pieces were written for and premiered by the trio.  Naturally, the Paganini Trio performs music composed by its namesake Nicolo Paganini.  As friends, they share a common goal – to enthusiastically share their unique music with a wide range of audiences throughout the world.

Joseph Gold, violinist, received his masters in music at the University of Southern California where he was a student of the world-renowned Jascha Heifetz.  Mr. Gold concertizes in the Far East, the western United States, Mexico, Central America and throughout Europe.  On a previous occasion in Vienna, he performed in the Lobkowitz Palace with Dr. Kurt Rapf, former director of music for the cities of Vienna and Innsbruck.  His performances throughout Spain, Germany, Czech Republic, Italy, and Switzerland were with the renowned guitarist Jaume Torrent.  In Venice, he played Bach and Vivaldi with the chamber orchestra of Trieste.  His concerts in Rome, Florence, Sicily, and Bulgaria were broadcast on national television.  While concertmaster of the famed Spoleto Music Festival, he was violin soloist for the famous Luciano Pavarotti.  In addition to Mr. Gold’s work as a performer, he is also an author and authority on the music of Paganini and Sarasate.

Debbie Dare is a violinist and violist with an international reputation.  She was the first violinist in important State Opera Orchestras in Germany.  Returning to America, she formed the Pro Musica String Quartet and the Divertimento Ensemble.  With these groups along with the Paganini Trio, she has performed in the musical capitals of the world, Vienna, the city of Mozart and Beethoven, acclaimed the international success of the ensemble.  In addition to chamber music, she has soloed with orchestras in Bulgaria, Austria, Germany, and Mexico.  While in Vienna, Debbie performed the world premiere of the violin-viola concerto by Kurt Rapf, who wrote this piece especially for Joseph Gold and Debbie Dare.  Ms. Dare is a recording artist and plays in the Fremont Symphony.  To the above, Debbie has added many administrative skills.  She was a founder of the Piedmont Center for the Arts, which has contributed monumentally to the artistic fabric of Piedmont.

JAUME TORRENT is considered the most important guitarist-composer in the world.  Born in Barcelona, maestro Torrent is sought after as an international guitar soloist.  As a composer, he has been commissioned to write pieces by many international orchestras and concert organizations.  In the past, he led the famous quartet known as the “Quartet Tarragó” and was director of the important Barcelona Conservatory of Music.  Like Andres Segovia before him, Jaume Torrent has inspired composers to write works for the guitar.  In addition, Sr. Torrent has composed many guitar works that are in the repertoires of famous musicians and major orchestras. Señor Torrent’s works are featured in the repertoire of many guitarists.  He has received many important international awards.  These include “President of the Jury” at the internationally renowned Subiaco Competition in Italy and the highest award of achievement, the coveted Gold Medal from the Republic of the Ukraine.