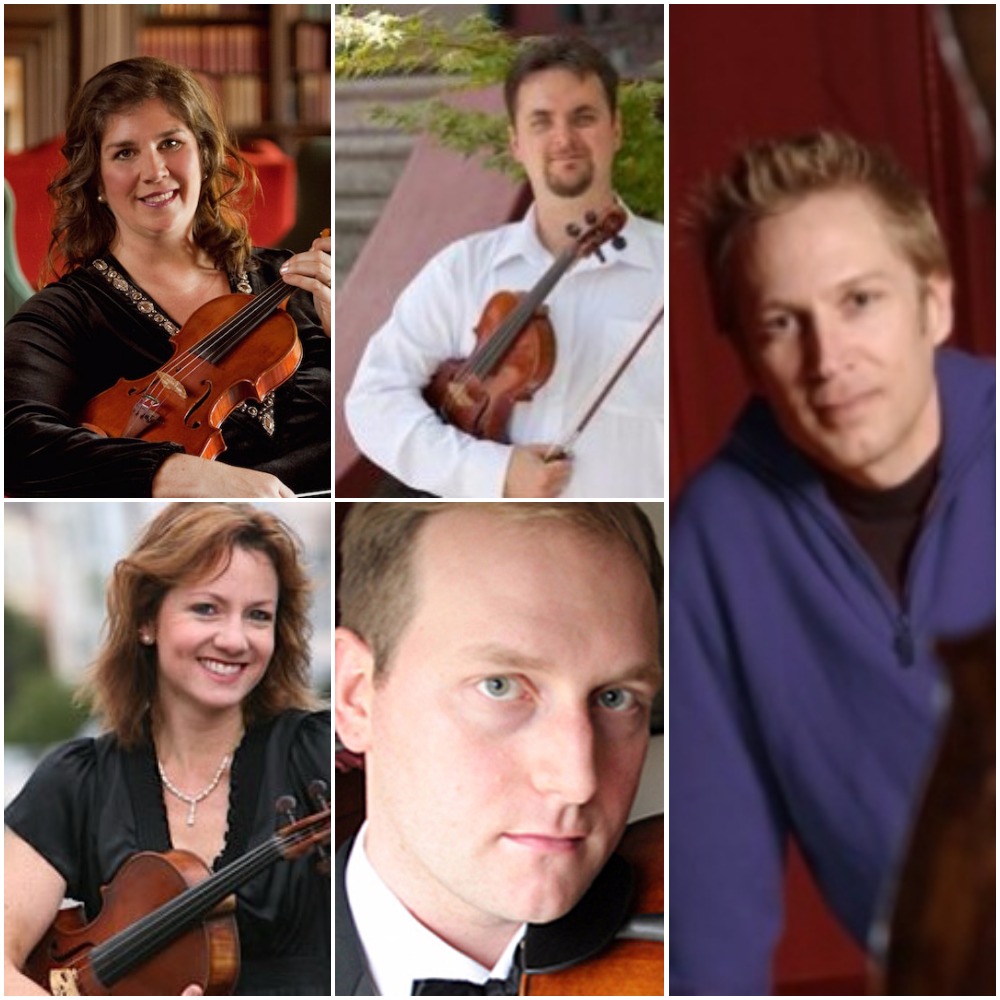 A native of Berkeley, Robin Hansen, violin, was nurtured in a musical family by parents, both prominent musicians and music teachers, who instructed Robin and her siblings in trumpet and piano. She followed her three brothers on the violin, studying for eighteen years, with William Pynchon of the San Francisco Opera Orchestra. While at university, she was the summer co-concertmaster with the Los Angeles Philharmonic Institute Orchestra under the tutelage of Leonard Bernstein and Michael Tilson Thomas performing at the Hollywood Bowl. She was a frequent soloist while concertmaster of the Young Peoples’ and Oakland Symphony’s Youth Orchestras as well as the first concertmaster of the San Francisco Symphony Youth Orchestra. She graduated with a Bachelor of Music degree from U.C. Berkeley where she was concertmaster of the Cal Symphony led by Michael Senturia, also performing with the Berkeley Contemporary Chamber Players.  Receiving three consecutive Alfred Hertz Memorial Traveling Fellowships from U.C. Berkeley for graduate study with Alexander Treger, concertmaster of the Los Angeles Philharmonic, Ms. Hansen went on to Munich, Germany with Christiane Edinger, concert violinist and recording artist. She joined Michael Tilson Thomas’ New World Symphony in Miami Beach, where she was a concertmaster during its inaugural years.  She has toured with the San Francisco Symphony in Europe and with the Israel Philharmonic conducted by Zubin Mehta in the United States.  Robin Hansen has performed extensively in the contemporary genre with the San Francisco Contemporary Chamber Players, Ear Play and Composers, Inc.  Ms. Hansen performs regularly with the San Francisco Opera and has been concertmaster at the Stern Grove Festival for the San Francisco Ballet Orchestra where she holds a position of first violin. In addition, she is a member of the Skywalker Symphony which records movie and video score projects at Skywalker Ranch in Marin County.

Dan Flanagan, violin, currently serves as Concertmaster of the Sacramento Philharmonic and Opera, the Modesto Symphony, Lecturer of Violin at the University of California, Davis, and Instructor of Violin at University of California, Berkeley. Described as a “stellar musician” (Nevada Reviews), he has been praised for his “exquisite tone” and “forthright brio” (Sacramento Bee).

A dedicated orchestral player, Flanagan has performed as concertmaster with the Oakland East Bay Symphony, the California Symphony, California Musical Theater, the Festival Opera of Walnut Creek, and has performed in the greatest concert halls of the US and Europe. Frequently featured as soloist with the Sacramento Philharmonic, Flanagan has also performed with the American River Chamber Orchestra, Bear Valley Symphony, Reno Baroque Ensemble, and the Adelphi Chamber Orchestra. As a chamber musician, Flanagan has performed with the Chamber Music Society of Sacramento, the Oregon Bach Festival, Chamber Music Alive! and at Chico State University, American River College, University of the Pacific, UC Davis, and UC Berkeley. In 2008, Dan founded Sacramento School of Music, where he is currently Director and Instructor of Violin.

Born in New Jersey and trained in New York and Michigan, he holds a Bachelor’s Degree from the Cleveland Institute of Music and a Master’s Degree from the University of Oregon, where he was a Graduate Teaching Fellow. His teachers include Linda Cerone, Charles Castleman and Fritz Gearhart. Flanagan plays on the violin made by JB Vuillaume, once owned by the celebrated American virtuoso Albert Spalding.

A native of South Africa, she was a prizewinner in the International String Competition in Pretoria and gave her debut at Carnegie Hall with the Russian Chamber Orchestra. She tours regularly as a soloist with the Chamber Ensemble of Cologne in France and has done two recent tours with the New Century Chamber Orchestra. Other engagements include Amelia Island Chamber Music Festival; Sun Valley Summer Symphony, Midsummer Mozart and “Chamber Music San Francisco”.  She performed regular viola recitals for 13 years with Maestro Donald Runnicles accompanying on the piano.

Marcel Gemperli began viola study at the age of nine in his native New York state. While earning his Bachelor of Arts degree at Harvard University, he continued his viola studies, as well as after graduation in Germany and Switzerland. Mr. Gemperli currently serves as Principal Viola of the California Symphony and performs with many Bay Area ensembles, including the San Francisco Symphony and the San Francisco Ballet Orchestra. He is much in demand at summer music festivals such as the Mendocino Music Festival, Telluride Chamber Music Festival, and the National Repertory Orchestra. He is active in the chamber group, “Music on the Hill,” recently presenting a recital at St. Aidan’s Church in San Francisco.

Cellist, Eric Gaenslen, has performed as a chamber musician, recitalist and guest soloist in venues across North America and Europe. As cellist of the renowned Rossetti String Quartet, Eric performed at the Concertgebouw in Amsterdam, Carnegie Hall, Lincoln Center, the Berlin Konzerthaus, and at the Spoleto Italy, Maverick and Vail Bravo Music Festivals, with such artists as Jean-Yves Thibaudet, Eugenia Zuckerman, Gautier Capuçon and Pepe Romero. Solo highlights include the world premiere of Siddartha for cello and string orchestra by Laura Carnibucci and a performance of Bloch’s Shelomo at New York’s Avery Fisher Hall. From 2009-2011 Eric held the position of Acting Principal Cellist of the Seattle Symphony Orchestra.