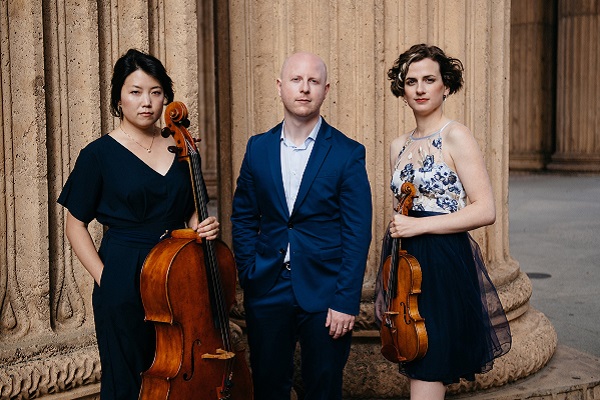 William Bolcom: Piano Trio 2014 (written for and dedicated to the Delphi Trio)

Prizewinners of the 2015 Orlando Concours in the Netherlands, the Delphi Trio has performed in Germany, the Netherlands, Canada, and across the United States. Recent highlights include the world premiere of William Bolcom’s Piano Trio; a concerto residency with the San Jose Chamber Orchestra and Barbara Day Turner; the west coast premiere of Paul Juon’s EpisodesConcertantes (1912) with Michael Morgan and the Oakland Symphony; and performances throughout the United States, including the Smithsonian American Art Museum, the Great Lakes Chamber Music Festival, and WFMT Studios Chicago.

The Delphi Trio is grounded in the immensely rich classic repertoire for piano trio and is committed to the exploration of its deep, lasting meaning for performers and audience alike. The Trio sees contemporary music as a natural extension of the standard repertoire and is therefore dedicated to the music of our time. Delphi has given acclaimed world premieres of William Bolcom’s Piano Trio (2014), Max Stoffregen’s Coyote Plan (2013) and Sahba Aminikia’s Deltangi-ha (2012) and Shab o Meh (2014). The Trio will be premiering a new work by Evan Price, composer and jazz violinist formerly of the Turtle Island Quartet, in the 2018-19 season.

The Delphi Trio believes chamber music is an ideal model for education. Delphi is committed to supporting young artists as they begin their careers and has established their Emerging Artist Program to collaborate with collegiate students in their first professional chamber music concert. The Trio also curates the Practice Project, a social media group dedicated to fostering community, openness, and vulnerability among both professional and amateur artists.

In addition to their work as a trio, Jeffrey, Liana, and Michelle perform in solo recital, larger chamber music, and as soloists with orchestra and believe in the symbiotic relationship between solo and collaborative work. They have individually performed with artists such as Robert Mann, Bonnie Hampton, Anthony Marwood, Menahem Pressler, Geoff Nuttall, Paul Katz, and the Alexander and Afiara Quartets.

Liana Bérubé, Michelle Kwon, and Jeffrey LaDeur are graduates of the University of Toronto, Stanford University and the Eastman School of Music respectively, and formed the Trio while studying in the prestigious Chamber Music degree program at the San Francisco Conservatory of Music. They count among their mentors Henk Guittart, Bonnie Hampton, the St. Lawrence String Quartet, and Stephen Prutsman, and have worked with Peter Wiley, Pedja Muzijevich, James Tocco, Anton Nel, and Pamela Frank.

As an ensemble, the Trio has always made food and friendship a priority and believe that these elements are at the heart of great chamber music. The ensemble is built on trust and communication; to that end, each Delphi rehearsal starts in the same way – a meal, conversation, and music.