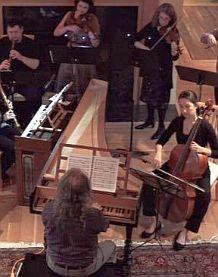 Johann Sebastian Bach: Concerto in a minor for flute, violin and harpsichord, BWV 1044

About The Albany Consort

1974 was a fairly bleak time for Early Music in London. Orchestras were modern, thick and heavy; historically informed performances were a rarity, and often not very precise. Against this backdrop, Jonathan Salzedo, Marion Rubinstein and a few friends started a new group, The Albany Consort, with the usual ideals – lively performances and no financial worries, but somehow they would eventually become rich and famous. Things rarely go as planned. Today, Jonathan is constantly surprised that the group still exists, still runs on a shoestring, still fuels his creative personality, and still provides the best musical experiences for performers and listeners.

Over the years, some 500 musicians have taken part in as many concerts on both sides of the Atlantic. With the broadest repertoire of any early music group, they tackle everything from the 17th and 18th centuries, from the largest to the smallest groupings, sometimes with period instruments, sometimes with modern setup. Jonathan’s view is that many different approaches to the music are possible, and he aims to bring together groups of musicians who can work together and create a terrific result.

After an initial concert series at Christ Church, Albany Street, London (hence the group’s name, which causes much delightful confusion in the USA), the group performed regularly in England until Jonathan moved to California in 1981. Since then, The Albany Consort has been a fixture of Bay Area music making.

Bach Cantata 211 text and translation
Our Next Concert