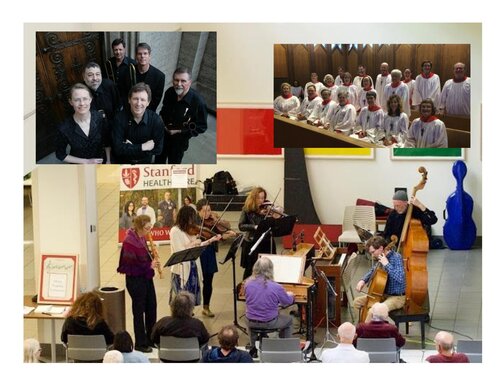 About the St Bede’s soloists

Under the leadership of Katherine McKee, the St Bede’s choir leads the congregation and sings anthems at services. Their wide repertoire ranges from medieval plainchant to Renaissance motets to works by the great Baroque, Classical, Romantic and 20th Century masters to music newly commissioned for the choir.

The six soloists who are the St Bede’s section leaders are also recitalists, members of other small choirs, San Francisco Opera performers and frequent oratorio soloists.

As well as singing for regular Sunday worship, the choir offers special services on feast days throughout the year. They also sing Compline at Stanford University’s Memorial Church as part of outreach into the greater community.

About The Albany Consort

In 45 years, the Albany Consort has given more than 500 concerts, on its own and in collaboration with other organizations, in productions ranging from two to 70 musicians, spanning the widest repertoire of any early music group. Some 500 musicians have engaged in the journey, some briefly, others over the long haul. Founder Jonathan Salzedo delights in finding others who are excited by interesting musical projects and inputting young musicians in the front line. He is part of a musical family that includes his wife Marion Rubinstein and daughter Laura Rubinstein-Salzedo, who are both integral to the group’s decision making. Recording is not a priority, so they only have a single shrink-wrapped CD – Jewish Art Music from Rossi to Lidarti – resulting from a fortuitous accident. Wonderful if slightly blemished live performances can be heard and seen at www.albcons.live.

About The Whole Noyse

The Whole Noyse has been one of the country’s leading early brass ensembles for over 30 years. Specializing in the music of the Renaissance and early Baroque, The Whole Noyse focuses on the combination of cornetts, sackbuts and curtal, instruments that made up the primary professional wind group of the 16th and 17th centuries. In keeping with the versatility expected of wind players of the period, the ensemble also doubles on recorders and flutes and often mixes in the sounds of shawm, slide trumpet, gittern, violin, and viola. The group has collaborated with North America’s most respected early music ensembles, and in 2010, the 400th anniversary of Monteverdi’s Vespers of 1610, participated in more than 15 performances of that monumental work in the US and Canada. Its solo recording, Lo splendore d’Italia, is available on the Helicon label.