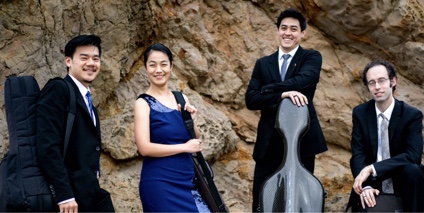 Due to increasing concerns surrounding the spread of the coronavirus (COVID-19) and Governor Gavin Newsom’s recommendation to postpone large events of more than 100 people and to keep a safe distance, Noontime Concerts has canceled all live performances through the month of March.

About The Telegraph Quartet: The Telegraph Quartet (Eric Chin and Joseph Maile, violins; Pei-Ling Lin, viola; Jeremiah Shaw, cello) formed in 2013 with an equal passion for the standard chamber music repertoire and contemporary, non-standard works alike. Described by the San Francisco Chronicle as “…an incredibly valuable addition to the cultural landscape” and “powerfully adept… with a combination of brilliance and subtlety,” the Telegraph Quartet was awarded the prestigious 2016 Walter W. Naumburg Chamber Music Award and the Grand Prize at the 2014 Fischoff Chamber Music Competition. The Quartet has performed in concert halls, music festivals, and academic institutions across the United States and abroad, including New York City’s Carnegie Hall, San Francisco’s Herbst Theatre, the San Francisco Conservatory of Music’s Chamber Masters Series, and at festivals including the Chautauqua Institute, Kneisel Hall Chamber Music Festival, and the Emilia Romagna Festival. The Quartet is currently on the chamber music faculty at the San Francisco Conservatory of Music as the Quartet-in-Residence.

Beyond the concert stage, the Telegraph Quartet seeks to spread its music through education and audience engagement. The Quartet has given master classes at the San Francisco Conservatory of Music Collegiate and Pre-College Divisions, through the Morrison Artist Series at San Francisco State University, and abroad at the Taipei National University of the Arts, National Taiwan Normal University, and in San Miguel de Allende, Mexico.