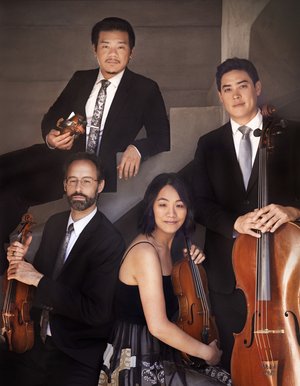 The Telegraph Quartet (Eric Chin and Joseph Maile, violins; Pei-Ling Lin, viola; Jeremiah Shaw, cello) was formed in 2013 with an equal passion for the standard chamber music repertoire and contemporary, non-standard works alike. Described by the San Francisco Chronicle as “…an incredibly valuable addition to the cultural landscape” and “powerfully adept… with a combination of brilliance and subtlety,” the Telegraph Quartet was awarded the prestigious 2016 Walter W. Naumburg Chamber Music Award and the Grand Prize at the 2014 Fischoff Chamber Music Competition. The Quartet has performed in concert halls, music festivals, and academic institutions across the United States and abroad, including New York City’s Carnegie Hall and Lincoln Center, San Francisco’s Herbst Theatre, the San Francisco Conservatory of Music’s Chamber Masters Series, and at festivals including the Chautauqua Institute, Interlochen Arts Festival, Kneisel Hall Chamber Music Festival, and the Emilia Romagna Festival. The Quartet is currently on the chamber music faculty at the San Francisco Conservatory of Music as the Quartet-in-Residence.

Notable collaborations include projects with pianists Leon Fleisher and Simone Dinnerstein; cellists Norman Fischer and Bonnie Hampton; violinist Ian Swensen; composer-vocalist Theo Bleckmann; and the Henschel Quartett. A fervent champion of 20th- and 21st-century repertoire, the Telegraph Quartet co-commissioned John Harbison’s String Quartet No. 6 and gave its West Coast premiere in the fall of 2017 on San Francisco State University’s Morrison Artists Series. The Telegraph Quartet premiered Richard Festinger’s third string quartet, Icarus in Flight, a musical representation of climate change data from the year 1880 to projected simulations of 2080. The Quartet gave the world premiere of Robert Sirota’s String Quartet No. 3, Wave Upon Wave at Weill Recital Hall for its Carnegie Hall debut in 2018, sponsored by the Naumburg Foundation. In fall 2021, the Telegraph will premiere a new work with soprano Abigail Fischer by composer Robert Sirota and librettist Stevan Cavalier, commissioned by Sierra Chamber Music Society.

Beyond the concert stage, the Telegraph Quartet seeks to spread its music through education and audience engagement. In the fall of 2017, the Quartet traveled to communities and schools in Maine with Yellow Barn’s Music Haul, a mobile performance stage that brings music outside of the concert hall to communities across the U.S. The Quartet has given master classes at the San Francisco Conservatory of Music Collegiate and Pre-College Divisions, through the Morrison Artist Series at San Francisco State University, and abroad at the Taipei National University of the Arts and in San Miguel de Allende, Mexico. Telegraph has also served as artists-in-residence at the Interlochen Adult Chamber Music Camp, SoCal Chamber Music Workshop, and Crowden Music Center Chamber Music Workshop. In November 2020, the Telegraph Quartet launched ChamberFEAST!, a chamber music workshop in Taiwan. ChamberFEAST! featured two concerts by the Telegraph at Eslite Concert Hall, week-long chamber music intensive with students from Taiwanese schools and the San Francisco Conservatory of Music, and masterclasses and coachings at high schools and universities across Taiwan.

The Telegraph Quartet has adapted to these challenging times and remains strongly committed to sharing its music. Recent and upcoming livestream concerts include performances presented by the San Francisco Conservatory of Music, Crowden Chamber Music Workshop, Noe Music, Noontime Concerts, Music in Corrales, and Intermusic SF. For Earth Day 2020 (the 50th anniversary of Earth Day), the National Academy of Science in collaboration with the ClimateMusic Project hosted a virtual performance by the Telegraph Quartet of Richard Festinger’s Icarus in Flight. Amid the ongoing COVD-19 pandemic, Telegraph launched an online video project called TeleLab, in which the ensemble collectively breaks down the components of a movement from various works for quartet. TeleLab draws the listener deeper into how those components fit together and evolve over the course of the piece while giving the audience the time and space to deepen their experience of music.