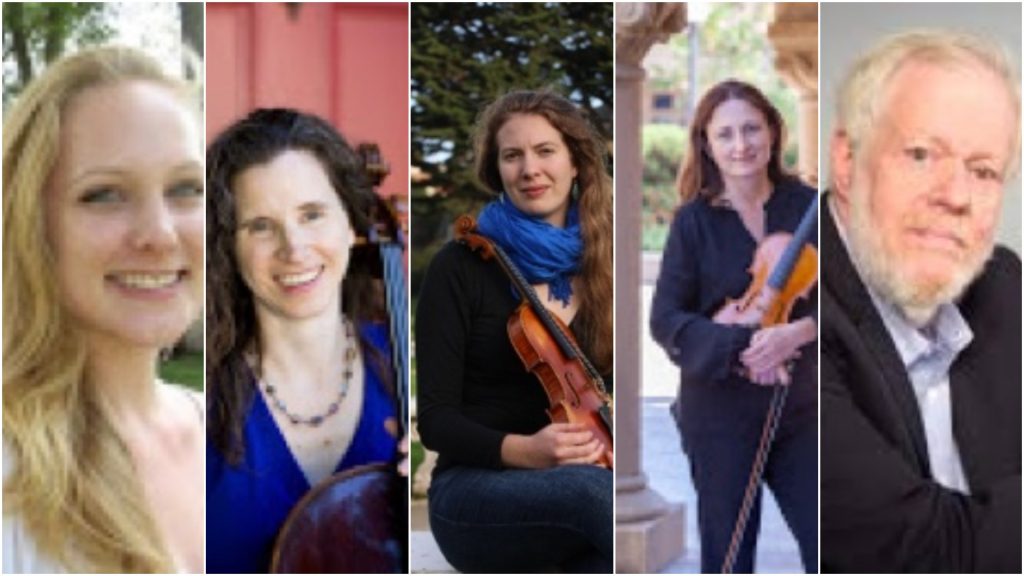 Romance from “The Gadfly” Op. 97, arranged for Piano Quintet by Dimitri Shostakovich

Violinist Sarah Wood is a regular substitute musician with the San Francisco Symphony.  She is a founding member of the Circadian String Quartet, a frequent recitalist, and holds tenured positions as Assistant Principal Second of the Berkeley Symphony and acting Assistant Concertmaster of the California Symphony.  Sarah has appeared as a soloist with the San Francisco Civic Symphony, the Music in the Mountains Festival Orchestra, the Villa Sinfonia, Panache & the Icicle Creek Chamber Orchestras.  Internationally, she has performed as a chamber musician and recitalist in the Netherlands, Tunisia, and Chile.

where she was a student of Paul Kantor & William Preucil. A California native, she also formerly studied with Zaven Melikian and Robin Sharp.  In addition to her busy performing schedule, she is currently a teacher in the

training of the Alexander Technique and often works as a clinician to help violinists design custom violin equipment.

Bulgarian violinist Emanuela Nikiforova is a graduate of International Menuhin Music Academy, LSU School of Music, and San Francisco Conservatory of Music. She has performed as a chamber and orchestral musician on three continents and recorded as such for Bulgarian TV, “Claves” and “RevistaClassica” (Buenos Aires). Currently a member of Berkeley, Marin, Oakland, Santa Rosa, and Silicon Valley symphonies, she enjoys chamber collaborations with colleagues and Bay Area guests. Most notably she has performed in a chamber group with Zuil Bailey, Stephen Clapp, Rene Mandel, and Maria Borozina, among many others. Emanuela is the Music Director of the formation Antika Slavic Strings, which performs for the Bulgarian community in the Bay Area. Emanuela teaches violin privately at home in Alameda, and at The Renaissance International School in Oakland.