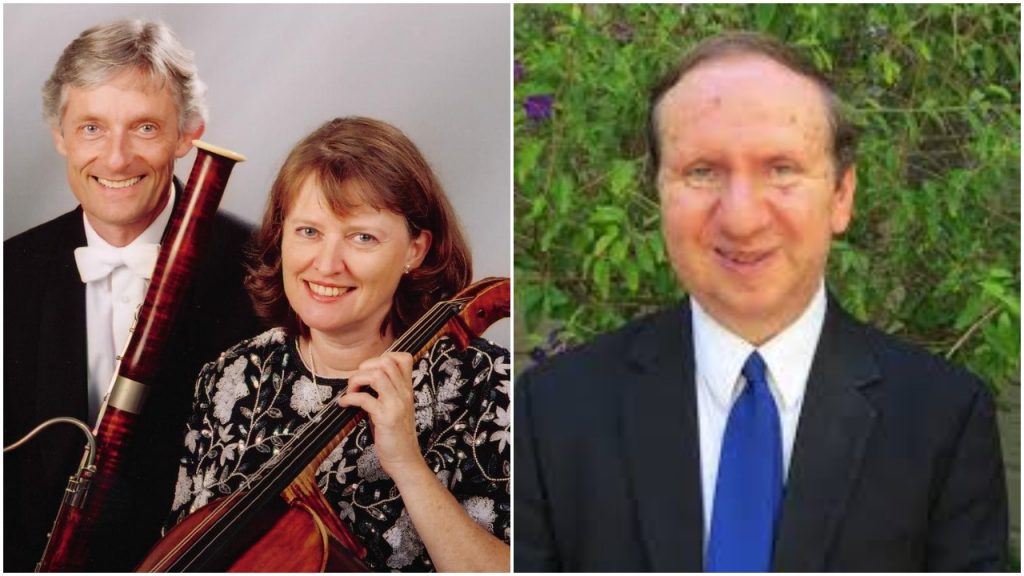 François Couperin: Duo in G Major for Cello and Bassoon

Internationally concertizing American cellist Rebecca Rust had studied with Margaret Rowell, Bernard Greenhouse and M. Rostropovich and German bassoonist Friedrich Edelmann was principal bassoonist of the Munich Philharmonic Orchestra under the principal conductors Sergiu Celibidache and James Levine as well as under guest conductors Karl Böhm, Georg Solti, Carlos Kleiber, Carlo Maria Giulini, Zubin Mehta, Kurt Masur, Erich Leinsdorf, Eugen Jochum, Wolfgang Sawallisch, Rafael Kubelik, Seiji Ozawa etc.  They are concertizing and recording regularly as cello-bassoon DUO and together with piano as a TRIO in Europe, U.S.A., and Japan, including performances at the Imperial Palace of Japan in Tokyo in front of Their Majesties Emperor Akihito and Empress Michiko and private music-making with Empress Michiko on the piano. In the summer of 2017, they were participants in the international FORFEST Festival in the Czech Republic performing mostly music composed for them.

In May 2018 they joined their friends, the authors Rudi Raab and Julie Freestone on a book-reading tour in 12 cities in Germany, with their book “Stumbling Stone”, which was now also published in German: “Stolperstein”. They played Jewish composers at these book reading events.

In July 2018: 11 concerts in Japan: Tokyo, Nagoya, Osaka, Kobe, Ohme, Yokkaichi, Okazaki, Mie. The tour was supported by Mercedes-Benz, Japan, by LEXUS-Toyota, NEODATA Solutions in Osaka and other venues, one at a Senchoji Temple in Shizuoka, one at the Kobe Bay Sheraton Hotel.

Concert on Nov. 11th 2018 in Kaiserslautern, Germany: A concert in memory of the Pogrom Night 80 years ago in Germany “Reichskristallnacht” of Nov. 9th, 1938, and in memory of the destruction of the beautiful Synagogue of Kaiserslautern; compositions by the forbidden or forgotten Jewish composers Mendelssohn, Robert Kahn, Hans Gál.

January 2019 Cremona, Italy with an Italian Dance Group, two dancers and cello & bassoon with “Duck, Death and Tulip”, a performance for children which had won 1st prize in Milano, Italy.

Dmitriy is currently a staff accompanist at the San Francisco Conservatory of Music and also teaches piano privately in the Bay Area.