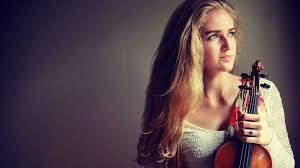 Hailed as “a total virtuoso” (Classic FM), violinist Rachel Ostler has been recognized for her interpretive artistry and charismatic presence. She has performed in concert halls all over the world, from the Poly Theatre in Beijing to the Teatro Colon in Buenos Aires, from the Walt Disney Concert Hall in Los Angeles to the KKL in Luzern. She has competed in numerous international competitions including the 2018 Paganini Premio Competition, the Princess Astrid Competition, the Isang Yun Competition, and the Leopold Mozart Competition, and she is the first prize winner of the 2016 Aspen Music Festival Concerto Competition, the AYS Concerto Competition, the Parness Competition, and the Rio Hondo Young Artist Competition.
​
Rachel made her solo debut at age 12, performing the Vieuxtemps Violin Concerto No. 5 with the Ludwig Symphony Orchestra. She also performed with the Coral Gables Orchestra in the WLRN television series American Ideal. As a young violinist, Rachel won prizes in various competitions; at 17 years old, she toured China with the BYU Chamber Orchestra, soloing in major concert halls in Beijing, Shanghai, Tianjin, Hangzhou, and Guangzhou. Since then, she has performed as a soloist with the ACA Orchestra at the Aspen Music Festival, Rio Hondo Symphony, Culver City Symphony, the Utah Philharmonic, and the Colburn Contemporary Performers, among others.
​
An avid chamber musician, Rachel has collaborated with notable artists including Augustin Hadelich, Gil Shaham, Gary Hoffman, and Johannes Moser. Rachel has been a fellow at the Aspen Music Festival and School and the Moritzburg Festival Academy and has attended the International Holland Music Sessions, the Lucerne Festival Academy, the Sarasota Music Festival, and the European American Musical Alliance.

While a student, Rachel performed in public masterclasses for internationally renowned violinists including Shlomo Mintz, Pinchas Zukerman, Joseph Silverstein, Pamela Frank, Anne Akiko-Meyers, and Baiba Skride. She has also performed under the baton of conductors such as Neville Marriner, Esa-Pekka Salonen, Matthias Pintscher, Stéphane Denève, Robert Spano, Vladimir Jurowski, and Giancarlo Guerrero, to name a few. Recent highlights of Rachel’s career include two Carnegie Hall performances in 2018 as well as a recording project of the complete Paganini Caprices.
​
Born in Austin, Texas and raised in Miami, Florida, Rachel began violin lessons at the age of 2. Her early training saw a variety of teachers including Sachiko Mori and Thomas Moore. In 2016, she received her Master of Music degree from the Colburn Conservatory, where she studied under Robert Lipsett, the Jascha Heifetz Distinguished Violin Chair.

Recently, Rachel completed postgraduate studies at the Yale School of Music, where she studied with Ani Kavafian.