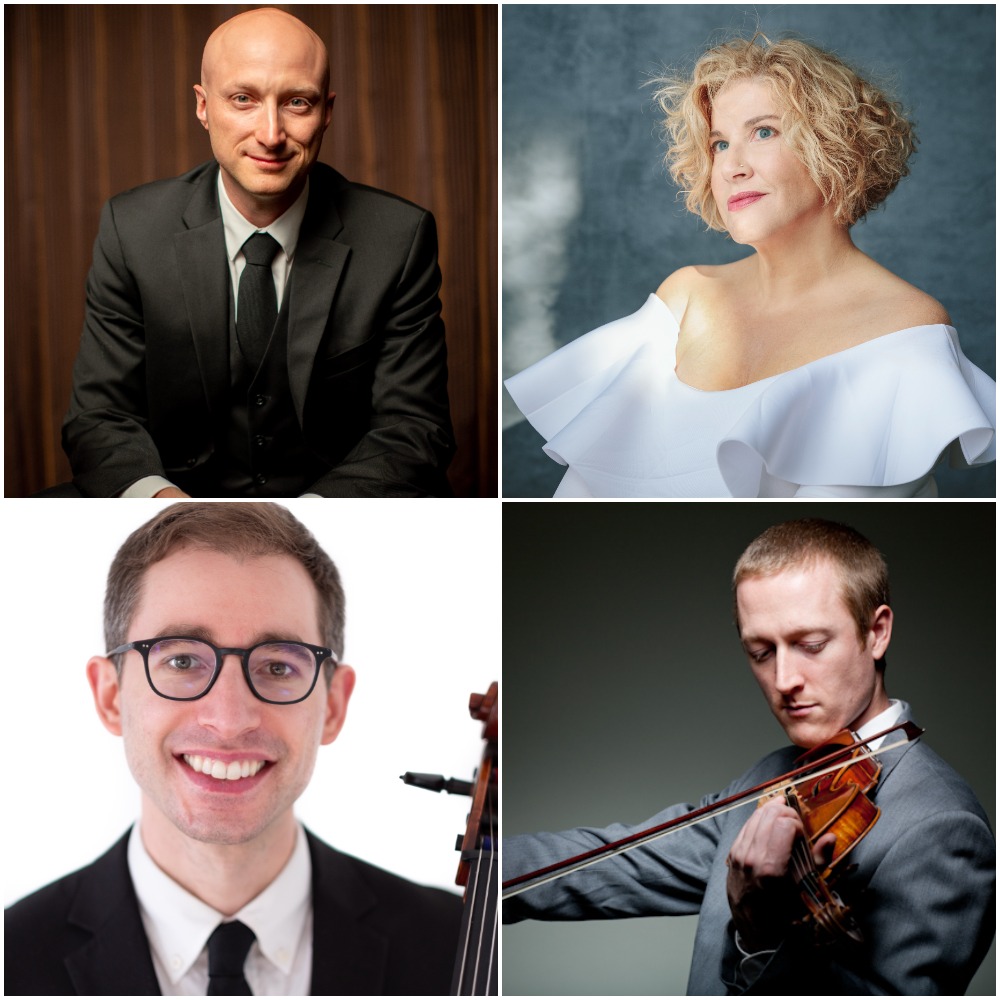 Requiem 77 for Cello and Air Traffic Controllers by Kevin Malone

American conductor and pianist, Paul Schrage appears frequently throughout the San Francisco Bay Area and the United States, leading orchestras, choruses, and festivals from the podium as well as performing as a solo and chamber artist. He currently serves as Music Director of Symphonia Caritas, a professional orchestra that provides benefit concerts in partnership with other non-profits, as well as Music Director of the Midsummer Mozart Festival. Most recently, Paul was invited to serve as Interim Music Director of the Contra Costa Chamber Orchestra during the 2019-2020 season. Previously he served on the conducting staff of the Merced Symphony and the Berkeley Community Chorus and Orchestra. Guest Conductor appearances include the San Francisco Academy Orchestra, Veridian Symphony, Nova Vista Symphony, and Sonoma County Philharmonic, among others. He also conducts and co-organizes the San Francisco Reading Orchestra, bringing some of the greatest orchestral literature to local musicians in an informal setting.

Combining his artistic endeavors with extensive experience as an impresario, Paul founded Symphonia Caritas in 2015 and has since partnered with numerous non-profit organizations such as Swords to Plowshares and the Gubbio Project, raising over $100,000 in proceeds that go directly to the partner organizations. In addition to serving as Music Director for the Midsummer Mozart Festival, Paul assists with vital organizational components including fundraising campaigns and guiding programming and concert production.

As a pianist, Paul has performed in recitals with orchestras and in jazz settings across the United States, in Europe, Brazil, and the Democratic Republic of the Congo. He has performed in such diverse venues as the INSAP Festival in Chicago, the Edinburgh Fringe Festival, the main square in Warsaw, Casa Huey Barbosa in Rio de Janeiro, and with the Orchestre Symphonique Kimbanguiste of Kinshasa. Equally at home, in the classical and improvisational realms, he frequently performs half classical, half jazz recitals. Artists with whom he has performed include harpsichordist Jory Vinikour, conductors David Ramadanoff, Armand Diangienda, and Elena Sharkova, trombonist and composer Bobby Brookmeyer, drummers Louis Bellson and Steve Smith, guitarist Gary Wittner, violinists Ian Swensen and Robin Hansen, and singers Christina Major, Kindra Scharich, and Nathan Granner. Paul has strong relationships with living composers and has performed world premieres of works by Ingrid Stozel, Rubin Zahra, Eric Choate, and Paul Davies, among others. He was the Pianist-in-Residence of the Contemporary American Music Project, where he frequently collaborated with musical theorist and historian Cameron Logan.

Released in 2004, Paul’s first solo album showcased the music of Mozart, Liszt, and Copland, as well as original compositions and jazz selections. With the jazz trio the Sideways Trio he released “In Defense of Our Dreams”, alongside drummer Jeff Hanson and bassist Doug Pohorski, featuring arrangements of rock songs, classical works, and original compositions. Paul has served on the piano faculties of Foothill College, Vandercook College of Music, and the International Summer Jazz Academy.

Heidi Moss, noted for her “rich and radiant soprano” (Edward Oriz, Sacramento Bee) has performed nationally and internationally in both opera and concert repertoire. A champion of new music, she helped spearhead the performance of numerous song premieres by renowned composers with LIEDER ALIVE! including Daron Hagen, David Conte, Kurt Erickson, and Henry Mollicone. In 2022 she will premiere a new song set by Tarik O’Regan as a part of the same series. She also performed a recital of works by Jake Heggie, with the composer himself at the piano. She has premiered works by composer/philanthropist Gordon Getty with the Russian National Orchestra and San Francisco Opera, most recently in a reading of his opera Plumpjack with baritone Lester Lynch.

In addition to her musical life, Heidi holds advanced degrees in biology. Her research on telomeres at Rockefeller University led to prestigious publications, including a landmark paper in Cell. Heidi teaches vocal physiology at the San Francisco Conservatory of Music; her interest in the science of singing began after she came down with a rare facial paralysis in 2007. Her publications and lectures focused on the intersection of science and singing, have been presented in journals, at universities, and at international conferences. She is the wife of composer/pianist Kurt Erickson and, in addition to their musical collaborations, they proudly parent four children together.

Praised for the warmth of his sound and range of color, American cellist Peter Myers (b. 1985) is internationally known as a chamber musician. A founding member of the Saguaro Piano Trio, which won first prize in the 2009 International Chamber Music Competition Hamburg, as well as SAKURA, a unique and innovative quintet of cellos (both currently Young-Ensembles-in-Residence with the Da Camera Society, Los Angeles), Mr. Myers has appeared at the Marlboro, La Jolla, and Mozaic festivals, on tour with Musicians from Marlboro, and abroad in Germany, Italy, Japan, China, Australia, New Zealand, Mongolia, Laos, and Pakistan. Since 2017, he has held the position of Assistant Principal Cello with the San Francisco Opera; he has also performed as guest principal cellist of the St. Paul Chamber Orchestra. His mentors have included Ronald Leonard at the Colburn Conservatory and Ralph Kirshbaum at the University of Southern California. He plays on an 1876 cello by Claude-Augustin Miremont.

Violinist Joel Pattinson is a teacher, performer, and adjudicator throughout California and the US. He operates the South Bay String Academy of Sunnyvale, California in addition to his current position on the violin faculty for Santa Clara Chamber Music. His specialties include Baroque, Classical, and Romantic Performance Practice as well as Renaissance Counterpoint. Joel appears as concertmaster, chamber musician, and soloist for many groups and plays with international artists such as Il Volo, Josh Groban, and Sarah Brightman.

If a body is what you want then here is bone and gristle and flesh. Here is the clavicle-snapped wish, the aorta’s opened valves, the leap thought makes at the synaptic gap. Here is the adrenaline rush you crave, that inexorable flight, that insane puncture into heat and blood. And I dare you to finish what you’ve started. Because here, Bullet, here is where I complete the word you bring hissing through the air, here is where I moan the barrel’s cold esophagus, triggering my tongue’s explosives for the rifling I have inside of me, each twist of the round spun deeper, because here, Bullet, here is where the world ends, every time.

A dusk, bats fly out by the hundreds.
Water snakes glide in the ponding basins
behind the rubbled palaces. The mosques
call their faithful in, welcoming
the moonlight as prayer.

Today, policemen sunbathed on traffic islands
and children helped their mothers
string clothes to the line, a slight breeze
filling them with heat.

There were no bombs, no panic in the streets.
Sgt. Gutierrez didn’t comfort an injured man
who cupped pieces of his friend’s brain
in his hands; instead, today,
white birds rose from the Tigris.

The Drum by John Scott of Amwell

I hate that drum’s discordant sound,
Parading round, and round, and round:
To thoughtless youth it pleasure yields,
And lures from cities and from fields,
To sell their liberty for charms
Of tawdry lace, and glittering arms;
And when Ambition’s voice commands,
To march, and fight, and fall, in foreign lands.

I hate that drum’s discordant sound,
Parading round, and round, and round:
To me it talks of ravag’d plains,
And burning towns, and ruin’d swains,
And mangled limbs, and dying groans,
And widow’s tears, and orphans moans;
And all that misery’s hand bestows,
To fill the catalogue of human woes.

The tygers of wrath are wiser than the horses of instruction.

There is no spark of reason in the world

And all is raged in ashy heaps of beastliness.

We for a certainty are not the first

Have sat in taverns while tempest hurled

Their hopeful plans to emptiness, and cursed

Whatever brute and blackguard made the world.

This is not what man hates,

Yet he can curse but this.

And dreams: this only is.

The Fury of Aerial Bombardment by Richard Eberhart

You would think the fury of aerial bombardment
Would rouse God to relent; the infinite spaces
Are still silent. He looks on shock-pried faces.
History, even, does not know what is meant.
You would feel that after so many centuries
God would give man to repent; yet he can kill
As Cain could, but with multitudinous will,
No farther advanced than in his ancient furies.
Was man made stupid to see his own stupidity?
Is God by definition indifferent, beyond us all?
Is the eternal truth man’s fighting soul
Wherein the Beast ravens in its own avidity?
Of Van Wettering I speak, and Averill,
Names on a list, whose faces I do not recall
But they are gone to early death, who late in school
Distinguished the belt feed lever from the belt holding pawl.

The Park by John Hollander

On His Seventy-Fifth Birthday by Walter Savage Landor

Grief by Elizabeth Barrett BrowningI tell you, hopeless grief is passionless—
That only men incredulous of despair,
Half-taught in anguish, through the midnight air,
Beat upward to God’s throne in loud access
Of shrieking and reproach. Full desertness
In souls, as countries, lieth silent-bare
Under the blenching, vertical eye-glare
Of the absolute Heavens. Deep-hearted man, express
Grief for thy Dead in silence like to death;
Most like a monumental statue set
In everlasting watch and moveless woe,
Till itself crumble to the dust beneath!
Touch it! the marble eyelids are not wet—
If it could weep, it could arise and go.

Remorse for Any Death by Jorge Luis Borges

Free of memory and of hope, limitless, abstract, almost future, the dead man is not a dead man: he is death. Like the God of the mystics, of Whom anything that could be said must be denied, the dead one, alien everywhere, is but the ruin and absence of the world. We rob him of everything, we leave him not so much as a color or syllable: here, the courtyard which his eyes no longer see, there, the sidewalk where his hope lay in wait. Even what we are thinking, he could be thinking;

we have divvied up like thieves the booty of nights and days.

It was not dying: everybody died.
It was not dying: we had died before
In the routine crashes— and our fields
Called up the papers, wrote home to our folks,
And the rates rose, all because of us.
We died on the wrong page of the almanac,
Scattered on mountains fifty miles away;
Diving on haystacks, fighting with a friend,
We blazed up on the lines we never saw.
We died like aunts or pets or foreigners.
(When we left high school nothing else had died
For us to figure we had died like.)

In our new planes, with our new crews, we bombed
The ranges by the desert or the shore,
Fired at towed targets, waited for our scores—
And turned into replacements and worked up
One morning, over England, operational.

It wasn’t different: but if we died
It was not an accident but a mistake
(But an easy one for anyone to make.)
We read our mail and counted up our missions—
In bombers named for girls, we burned
The cities we had learned about in school—
Till our lives wore out; our bodies lay among
The people we had killed and never seen.
When we lasted long enough they gave us medals;
When we died they said, “Our casualties were low.”

The said, “Here are the maps”; we burned the cities.

It was not dying —no, not ever dying;
But the night I died I dreamed that I was dead,
And the cities said to me: “Why are you dying?
We are satisfied, if you are; but why did I die?”

Then by Muriel Rukeyser