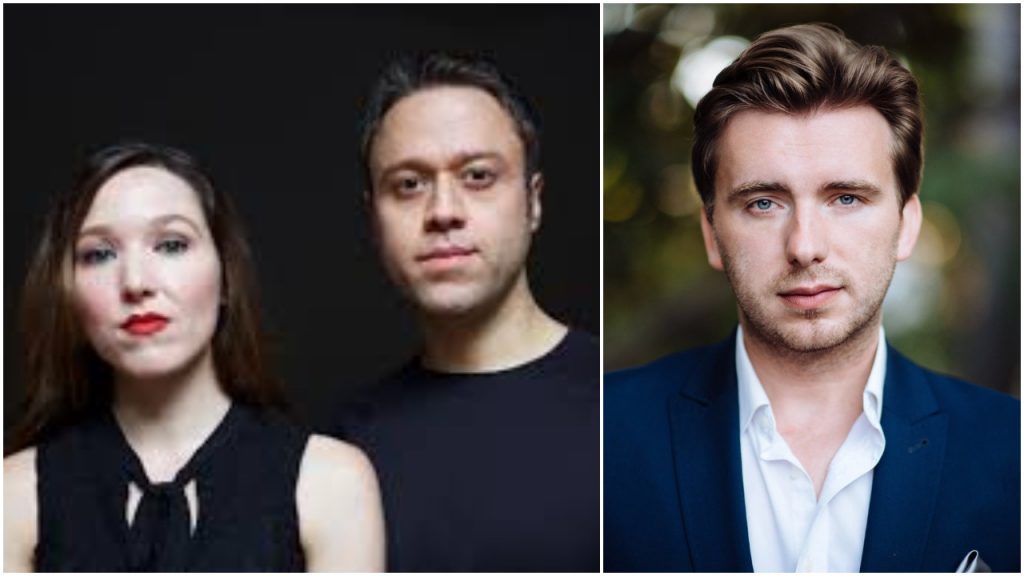 Praised as “a great artist” (José Feghali, 2013) and for his “virtuosity and poetry” (Vladimir Leyetchkiss, 2013), pianist Paul Tuntland Sánchez has concertized in North America and Europe and has appeared on CBS national television and in radio broadcasts nationwide. Sánchez, who lived in Barcelona from 2005–2007 as a Fulbright fellow, is the only American concert pianist to have earned a Master of Spanish Music degree under the legendary Spanish pianist Alicia de Larrocha.

An active recording artist featured in six commercial releases as of 2017, he is also an avid composer, and his works have been featured on the Soundset Recordings and Albany labels. Sherod Santos, American poet and translator of the Sappho texts in Sánchez’ song cycle “The journey,” describes Sánchez’ composition as “a magnificent achievement, a work of great innovation and hypnotic effect, impossible to walk away from unmoved.”

His musical partnership with his wife Kayleen Sanchez in a performance of composer David M. Gordon’s piece “Fader, Stilla Våra Andar,” was praised by the composer as “both deeply moving and extraordinarily precise. I couldn’t have asked for a better rendition.”

Dr. Sánchez currently serves as Director of Piano Studies and Director of the International Piano Series at the College of Charleston in South Carolina. He has also taught at the Baylor University School of Music and at the Wheaton College-Conservatory of Music. He is a frequent adjudicator in piano competitions throughout the United States and is the co-founder of the Dakota Sky Academy.

Sánchez studied with Tamás Ungár at Texas Christian University, and with Douglas Humpherys at the Eastman School of Music, where he completed his Master of Music and Doctor of Musical Arts degrees. Sánchez is a New Piano Collective artist.

Kayleen Sánchez is an active performer, recording artist, and pedagogue. She is a founding member of the lute song duo BEDLAM. Recent BEDLAM engagements include the Phoenix Early Music Society, Pegasus Early Music, and the Rochester Early Music Festival. BEDLAM has been broadcast on Rochester’s WXXI, WWFM’s “Well-Tempered Baroque”, South Dakota Public Broadcasting, and Arizona PBS. BEDLAM released its debut album, BEDLAM (Athyr Records) in 2015, and their latest album, Died for Love (Soundset Recordings) was released in June of 2017. BEDLAM’s active touring schedule can found on their website at www.bedlamearlymusic.com.

American composer David M. Gordon praised her performance of his music as “deeply moving and extraordinarily precise,” and dedicated a large-scale song cycle, “Mysteria Incarnationis,” to Sánchez and her husband, pianist Paul Sánchez (CD release TBA). Kayleen is also featured on the CD Magus Insipiens (Soundset Recordings, 2016), performing song cycles composed by Paul Sánchez, and appears on the CDs West Meets East (Albany Records) and Music of George Morey (label TBA). She also recorded Schubert’s Schwanengesang with pianist Johnandrew Slominski on a Viennese-style fortepiano. Their recording has been released on the Soundset label and features ornamentation and other historically-informed performance practices.

Sánchez received her Bachelor of Music and Master of Music degrees in Vocal Performance and Literature from the Eastman School of Music. She is on voice faculty at the College of Charleston in Charleston, SC.

Inspired by the performance practice of the past, Lipinski investigated the historical traditions of a piano recital in his doctoral dissertation: “From Liszt to Victor Borge: A Legacy of Unique Piano Performances.” During his undergraduate years at Eastman, he was accepted into an honors program called Musical Arts Major, working for two years on developing a unique concert program that combined piano recital with his lifetime interest in magic performance. After an unusual collaboration with the legendary magician Teller from the Las Vegas duo Penn & Teller, Lipinski won the WQXR’s Classical Comedy Contest at Caroline’s on Broadway. Upon the success of the competition, he premiered an original program of “Piano Illusions,” a concert of music and magic, which he continues to perform at recital halls, symphony orchestras, and as encores during his classical recitals.