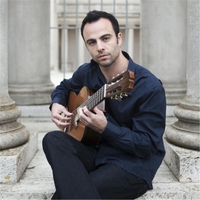 Guitarist and versatile musician, Paul Psarras has embraced a broad range of musical styles throughout his young career.  Rooted by his Greek heritage, he was exposed to Greek folk music from a young age that led to his career as a professional musician.  A recent graduate, with a bachelor’s and master’s degrees from the San Francisco Conservatory, Paul has studied with David Tanenbaum, Charles Ferguson, Mark Teicholz, Dusan Bogdanovic, Lawrence Ferrara, Sergio Assad and Richard Savino.

2012’s highlights began with an invitation to the GRAMMY’S for his role in the recording Kingdoms of Castille, with El Mundo and in June, he performed in the San Francisco Opera’s Merola program. Last year’s performances included an appearance with the San Francisco Symphony and conductor/composer John Adams in his nativity oratorio El Nino, with Soprano Dawn Upshaw.  As a member of the Pacific Guitar Ensemble, he performed in a five-concert tour of the bay area.  As a soloist he appeared with the Vallejo Symphony and the Bear Valley Orchestra performing the Concierto de Aranjuez.  His composition Alkioni, was performed around the Bay Area by the Pacific Guitar Ensemble and the Mobius Trio.

An enthusiast of early music and modern music alike, Mr. Psarras performs from the vast array of genres from Renaissance to Modern.  He performed with acclaimed early music group El Mundo in their GRAMMY nominated recording Kingdoms of Castille.  In 2010, he was featured on a world premiere recording including acclaimed Russian composer Sophia Gubaidulina’s Repentence, featuring concert guitarists David Tanenbaum and Thomas Viloteau and two principle players from the San Francisco Symphony.  Also recorded is Belinda Reynolds’ guitar ensemble work, Begin, with the Pacific Guitar Ensemble.

Over the past decade, Paul has been rhythm guitarist and lead vocalist with Fotia, a successful Bay Area-based Greek band that has played various cultural events throughout the United States.  Fotia has released several recordings where Paul played an integral role as arranger, producer and performer, playing several different instruments including the Oud, Saz, and other folk instruments.

Paul took second prize in the 2008 Wesley Day solo classical guitar recording competition and was a prize winner at the 2010 and 2011 Sierra Nevada Classical Guitar Competition.  He was a finalist in the 2009 and 2011 SFCM concerto competitions and is a recent graduate of the professional studies program with an emphasis in early music performance practice at the San Francisco Conservatory under the tutelage of Sergio Assad and Richard Savino.