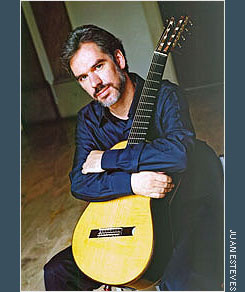 PAUL GALBRAITH’s recording of the Complete Bach Violin Sonatas and Partitas was nominated for a GRAMMY AWARD in the category of Best Solo Instrumental Album.  This 2-CD set was also chosen as one of the two best CDs of the year by Gramophone Magazine, which called it “a landmark in the history of guitar recordings.”  It received a “Four Star” rating in Stereo Review and reached the Top 10 on Billboard’s classical charts.

In Galbraith’s unique playing position, the guitar is supported by a metal endpin, similar to that of a cello, which rests on a wooden resonance box.  The instrument has two extra strings, one high, one low.  Both the guitar’s extraordinary design and Galbraith’s playing style are considered groundbreaking development in the history of the instrument, increasing its range to an unprecedented extent.

Most recently, Galbraith has appeared in festivals in Vienna, Austria and in Spain, Italy, China and South Korea. Later this season He made his New York début at the Frick Collection, receiving a rave review in the New York Times; later this season he appears for the third time on Lincoln Center’s “Great Performances” series, and he has twice given solo recitals at the 92nd Street Y.  Recent and forthcoming engagements include NYC, Boston, Washington DC, Los Angeles, San Diego, Atlanta, St. Louis, Cincinnati, Cleveland, Portland Seattle, Miami, Baltimore, Buffalo, Milwaukee, San Antonio, San Juan (Puerto Rico), and Cuernavaca (Mexico).  In addition, recitals in Geneva, Basel, and Moscow, and tours of the UK, Spain, Portugal, the Netherlands, Denmark, Norway, Finland, Germany, Italy, Hungary, Poland, Israel, and Turkey are among Mr. Galbraith’s international activities.  He has appeared at numerous Bach festivals, including those of Los Angeles, Philadelphia, Denver and Carmel.

At the age of 17, Galbraith won the Silver Medal at the Segovia International Guitar Competition.  Andrés Segovia, who was present, called his playing “magnificent.”  This award helped launch a career including engagements with some of the finest orchestras in Britain and Europe. He toured the U.S. as soloist with the Moscow Chamber Orchestra and performed in Prague’s Dvorák Hall with the National Chamber Orchestra of Chile.

Born in Scotland and now residing in Basel, Switzerland, Galbraith has lived in Malawi, Greece, London, and Brazil.