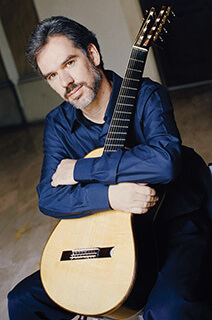 All works arranged for 8-string guitar by Paul Galbraith

PAUL GALBRAITH is internationally renowned as one of the foremost guitarists of our time. The searching depth of his interpretations, along with his revolutionary playing style and instrument, have made him an instantly recognizable figure in the world of classical music.

Galbraith’s recording of the Complete Bach Violin Sonatas and Partitas was nominated for a GRAMMY AWARD in the category of Best Solo Instrumental Album. This 2-CD set was also chosen as one of the two best CDs of the year by Gramophone Magazine, which called it “a landmark in the history of guitar recordings.” It received a “Four Star” rating in Stereo Review and reached the Top 10 on Billboard’s classical charts.

Both Galbraith’s playing position, and his guitar’s extraordinary design, are considered groundbreaking development in the history of the instrument, The guitar is supported by a metal endpin, similar to that of a cello, which rests on a wooden resonance box. The instrument has two extra strings, one high, one low, increasing its range to an unprecedented extent.

Galbraith’s most recent CD is “Allemande” — music by Bach and Mozart. Among his current projects are his duo with cellist Antonio Meneses of the legendary Beaux Arts Trio.

Born in Scotland and now residing in Cambridge, England, Galbraith has lived in Basel, Switzerland and São Paulo, Brazil. He is a professor at the Music Academy of Basel.

(the above CDs are on the Delos label)

A CD and DVD of works by Bach, Mozart, and Britten, with encore pieces by Bach, Albeniz, and Ravel.