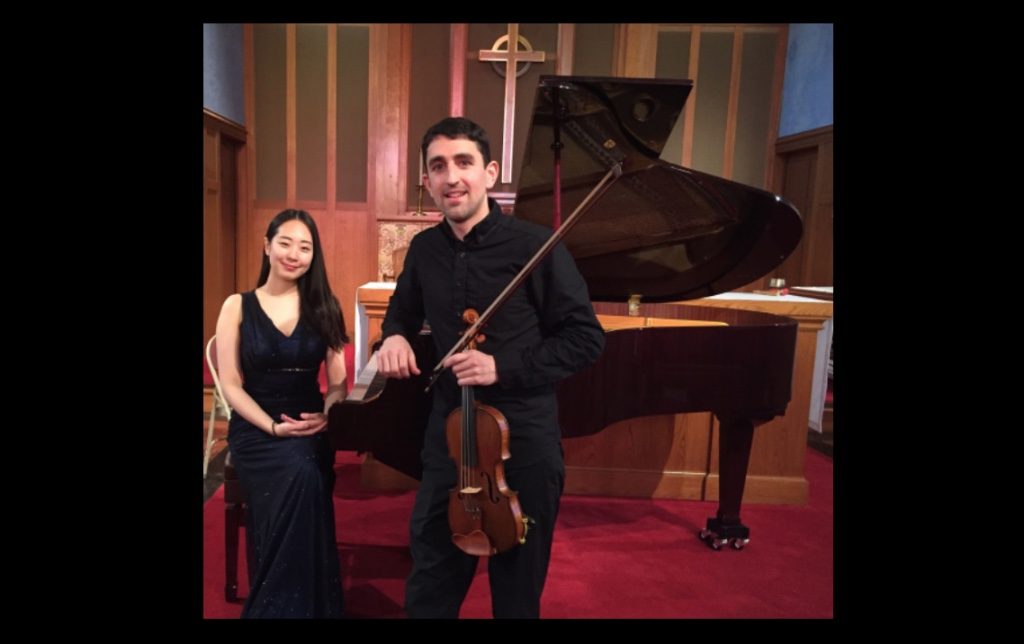 Patrick Galvin is a graduate of the San Francisco Conservatory of Music, where he studied with Camilla Wicks and Wei He. Patrick also spent 2 years studying violin with Barbara Gorzynska at the Prayner Konservatorium in Vienna, Austria.

Patrick is fiscally sponsored by InterMusic SF and recently commissioned two new works from composers Stefan Cwik and Axel Hererra. Patrick premiered these works in Spring, 2019 and will continue to perform them with pianist Jungeun Kim. In June 2019, Patrick and Jungeun will perform on Hawaii Public Radio as part of the station’s Atherton Summer Concert Series.

Other concert highlights this season have included 4 solo concert/talks of works by Telemann, Bach, and Westhoff; a recital with pianist Cecilia Cirion in Mexico City, Mexico; and a solo appearance with the Zion Chamber Orchestra Symphony performing Mozart’s Violin Concerto No. 5.

Earlier this season, Patrick joined the Circadian String Quartet for a handful of concerts around the Bay Area.

Patrick is a member of the folk band Hoxton Mob who perform regularly throughout the San Francisco Bay Area, and whose first album is currently available on itunes® and on vinyl.

Patrick Galvin is the Liberated Performer® coach for the Bay Area. He is also a San Jose Youth Symphony section coach and former teaching assistant to Wei He (former faculty at The San Francisco Conservatory and now artistic director of The Tianjin Juilliard School).

Patrick made his solo debut at age 11 with the Oakland East Bay Symphony playing the Bruch Violin Concerto No.1. He was the winner of the East Bay Young Artist Competition in 2000, the Yehudi Menuhin/Helen Dowling award in 2002 and the Kensington Young Artist Competition in 2003. In April 2004 he was the soloist with the Kensington Symphony playing the Vieuxtemps Violin Concerto No 5. He has also performed at the Junior Bach Festival. In 2013 and 2015, Patrick competed in the Johannes Brahms International Competition in Pörtschach, Austria.

Jung-eun Kim was born in Changwon, South Korea, and made her solo debut with the ChangwonPhilharmonic Orchestra at age 11. Since then, she has won several prizes both in the United States and Korea, including the 2019 San Francisco Conservatory of Music Concerto Competition, 2019 Barbara Fritz Chamber Music Award, 2018 Fresno Musical Club Competition, 2017 Berkeley Piano Club Dorothy Van Waynen Competition, 2014 Ceramic Palace Hall Concours, 2014 Music Education News Concours and 2008 Eumaksekye Piano Competition. She made solo appearances in the winners’ concerts of all of the above-mentioned competitions. Jung-eun has concertized with numerous symphony orchestras, including the Konkuk Symphony Orchestra, Changwon Philharmonic Orchestra, and Changwon Youth Philharmonic Orchestra and she was also featured on NPR’s From the Top program broadcasted nationwide in 2018 Summer. As an avid chamber musician, she formed the “L’arc Trio” with Maria van der Sloot on violin and Christine Lee on cello in 2018 and they are currently working on a commissioned work with composer Vivian Fung sponsored by an InterMusic SF grant. Celebrating Beethoven’s 250th Birthday in 2020, they will be presenting ‘Beethoven 250 Concert’ featuring their commissioned work in Calgary, Canada, and the Bay Area. Jung-eun is pursuing her Master’s degree in Chamber Music at the San Francisco Conservatory of Music with Yoshikazu Nagai, and she works as an accompanist for the pre-college division of the Conservatory.