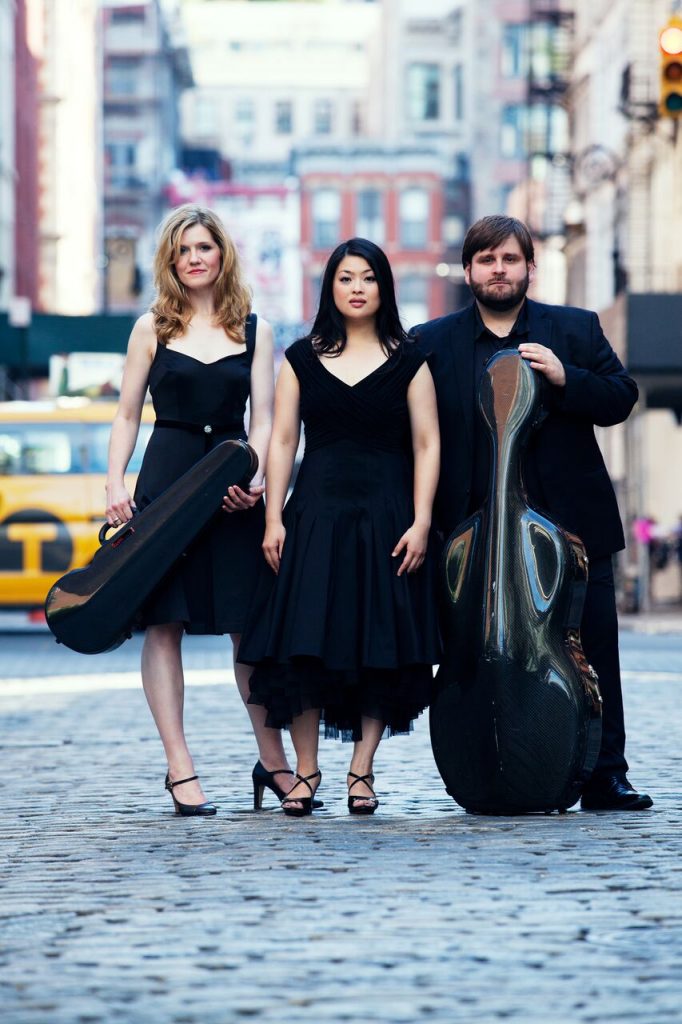 The Piano Trio in G Major was written while in residence during a summer stay in Italy.  At the time, Debussy was an eighteen-year-old student at the Paris Conservatory of Music.  The work was only discovered in 1982 from the legacy of a Debussy pupil and published in 1986.  Up to that point, Debussy had received little instruction in musical composition. The work, packaging four delightful movements; nevertheless, suggests a unique style of composition unfolding.

Astor Piazzolla is an Argentine composer who lived for several decades in New York City.  He is best known for his passionate modern tangos spiced with classical and jazz styles. Las Cuatro Estaciones Porteñas (translated: Four Seasons in Buenos Aires) is a collection of compositions, each written separately during a five-year span for quintet with bandoneon (a type of glorified concertina or accordion).  The current piano trio version was arranged by Jose Bragato.  The movements represent the experience of yearly seasons in Buenos Aires: spring (primavera), summer (verano), autumn (otoño), and winter (invierno).

Since forming in 2010, Neave Trio – violinist Anna Williams, cellist Mikhail Veselov, and pianist Eri Nakamura – has earned enormous praise for its engaging, cutting-­edge performances. WQXR explains, “‘Neave’ is actually a Gaelic name meaning ‘bright’ and ‘radiant’, both of which certainly apply to this trio’s music-making.” The Boston Musical Intelligencer included

Neave in its “Best of 2014” and “Best of 2016” roundups, writing, “it is inconceivable that they will not soon be among the busiest chamber ensembles going,” and “their unanimity, communication, variety of touch, and expressive sensibility rate first tier.”

Neave has performed at many esteemed concert series and at festivals worldwide, including Carnegie Hall’s Weill Recital Hall, 92nd Street Y, Chamber Music Society of Lincoln Center/La Jolla Music Society, Rockport Chamber Music Festival, Norfolk and Norwich Chamber Music Series (United Kingdom), and the Samoylov and Rimsky Korsakow Museums’ Chamber Music Series in St. Petersburg (Russia). The trio has also appeared frequently as soloists for Beethoven’s Triple Concerto with orchestras across the country and held residency positions at Brown University, ArtsAhimsa Chamber Music Festival, San Diego State University as the first-ever Fisch/Axelrod TrioinResidence, and the Banff Centre (Canada), among many other institutions. In the fall of 2017, the Trio joined the faculty of the Longy School of Music of Bard College as Alumni Artists, Faculty Ensemble-in-Residence.

Neave released their latest album, French Moments, on Chandos Records in June 2018. The album showcases works by Debussy, Fauré, and Roussel, and was featured on WQXR’s list of “The Best New Recordings of 2018 (So Far).” Of the album, WQXR wrote, “The up-and-coming Neave Trio makes a compelling case for these lesser-known piano trios by Roussel, Debussy,  and Fauré, coloring them with exquisite phrasing and delicate touch.” Neave’s 2016 debut album, American Moments, was released to critical acclaim on Chandos Records and features works by Korngold, Foote, and Bernstein. In fall 2018, the ensemble will release an album of all-new arrangements of Piazzolla’s works for piano trio and voice by Argentine arranger Leonardo Suarez Paz. The album will be released on Azica Records and will feature mezzo‑soprano and Metropolitan Opera singer Carla Jablonski.

“‘Neave’ is actually a Gaelic name meaning ‘bright’ and ‘radiant,’ both of which certainly apply to this trio’s music making.” – WQXR

“a delectable joyful surprise … It is inconceivable to me that they will not soon be among the busiest chamber ensembles going.” – The Boston Musical Intelligencer

“My introduction to the Neave Trio was a revelation.” – SDNews

“the players find what’s important and stirring in the music … The Debussy Piano Trio No. 1 in G major … is given an entirely appropriate brisk, slightly brash performance … this album will satisfyingly fill many an empty space in collections of French music.” – AllMusic

“The Best New Recordings of 2018 (So Far) … The up-and-coming Neave Trio makes a compelling case for these lesser-known piano trios by Roussel, Debussy, and Fauré, coloring them with exquisite phrasing and delicate touch.” – WQXR

“Electric energy and easy virtuosity . . . With persistent flair, the musicians brought out the complex textures, jazzy rhythms, and moody drama of all three works on the program. Their name may be Gaelic, but they are young masters of both the classic and the modern ‘American’ modes.” – Blogcritics

“The title of the ensemble comes from a Gaelic name and translates to ‘bright’ or ‘radiant.’ The certainly lived up that description in their vigorous performance … featuring high energy works by Faure, Foote, and Piazzolla.” – Hardwick Gazette

“the three piano trios offered by the Neave Trio…provide perfect vehicles to justify the etymology of the ensemble’s chosen title, since ‘Neave’ derives from the Gaelic designation for ‘bright’ and ‘radiant.’ … The Neave Trio has imbued this rare chamber work with a sonic luster elegant and refined.” – Audiophile Audition

“All three of these very gifted players have such manifest commitment to, and love of, the music they perform . . . This is a superb disc.” – Music Web International

“The three piano trios offered by the Neave Trio . . . provide perfect vehicles to justify the etymology of the ensemble’s chosen title, since ‘Neave’ derives from the Gaelic designation for ‘bright’ and ‘radiant’ . . . The Neave Trio has imbued this rare chamber work with a sonic luster elegant and refined.” – Audiophile Audition

“These are such talented musicians, and they’ve put together another fascinating CD program . . . This is powerful, moving music, played with great sentiment but also grace and finesse.” – Music for Several Instruments

“RECORDING OF THE MONTH . . . emphatically worth hearing simply for the inspired quality of the music-making . . . I do hope that an established recording label will get hold of this brilliant trio and provide them with the opportunity to record more . . . It was a joy to listen to this disc.” – Music Web International

“what they’ve got here, on their second Chandos album, is wonderful … Debussy’s G-major Trio is the disc’s centerpiece and is played with a delicate touch … they freely dig into [Roussel’s] lyrical extremes, making vivid work of the stirring opening movement and delivering a haunting, introspective reading of the second … there’s plenty of drama to be found in the Neave’s performance … a fresh, enticingly-played release, highly recommended.” – The ArtsFuse