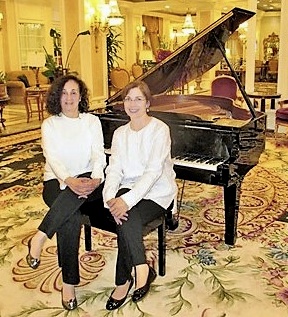 Mirta Gómez received her early piano training from her mother in her native Cuba. She continued her musical education at the San Francisco Conservatory of Music and at the Juilliard School in New York.

Ms. Gómez’s recent performances include recitals at the Leo S. Bing Auditorium at the Los Angeles County Museum in Los Angeles, CA. and the Metropolitan Museum of Art in New York City.

Additionally, she has performed in a private recital for Mayor and Mrs. Giuliani at Gracie Mansion in New York City and has appeared in a televised performance at the Conservatorio Nacional ” Lopez Buchardo ” in Buenos Aires, Argentina.

A dedicated champion of both Cuban and 20th Century Music, Ms. Gómez was honored by the internationally acclaimed Cuban composer, Tania León, who wrote SATINE, a work for two pianos, especially for her. She recently lectured in Guadeloupe in French at the Conference on Cuban Composers of the 19th and 20th Centuries.

Ms. Gómez has recently been a Visiting Professor at the University in Tulsa, Oklahoma, Portland, Oregon; Philadelphia, Pennsylvania; Tulane University in New Orleans; and most recently at the Graduate Center City University of New York.

Mirta Gómez presented a private lecture-recital for the Fundación Esperanza of Mexico that took place at the Cohen’s Residence and was interviewed on Mexican television for the program ” Espectaculos ” on TV Azteca, Mexico. She also presented lecture-recitals on Latin American and American composers as well as performing solo recitals that included the standard repertoire and 19th and 20th-century Cuban composers on a four-month tour of the Americas. Also performed at the ” Steinway Artists Concert Series ” in Miami, FL.

The summer of 2005 Mirta Gómez made her Debut at the “Tel -Hai Festival ” in Israel.

In the summer of 2012, Ms. Gómez lectured at the Library of Congress in Washington DC. and in the Fall of 2013 at the University of Huelva in Andalucía, Spain.

In the summer of 2017, Ms. Gómez was invited to participate in the “9th World Piano Conference Festival “in Novi Sad, Serbia.

In the Fall of 2017, she will be performing, lecturing, and giving Master Classes in the USA, Europe, and the Middle East.

Mirta Gómez is the winner of the ” Artists International Piano Competition 2005.”

She has coached on several occasions with the late pianist Madame Alicia de Larrocha, in Barcelona, Spain.

Mirta Gómez is a Steinway Artist.

Sahily Cánovas was born in Camagüey, Cuba, and began her music studies at age 7, attending the Luis Casas Romero School of the Arts and the José White School of Music. After winning numerous national competitions and a debut performance at the Gran Teatro de La Habana García Lorca, at age 18 Sahily was selected to pursue advanced studies in piano in the USSR. There, she studied under Valery Kozlov at the Kyiv State Conservatory, and with Anatoly Harchenko at the Odesa State Conservatory, where she graduated with a Master of Fine Arts in Piano Performance. Sahily has also pursued advanced studies under the guidance of Santiago Rodríguez.

Sahily’s performing career has included solo piano recitals in the Rachmaninoff Hall at the Tchaikovsky Conservatory in Moscow, the Prokofiev Festival at the Kyiv State Conservatory in Kyiv, and at music festivals in Camagüey, Cuba, and Miami, Florida. Her chamber music performances include collaborations with soprano Eglise Gutiérrez, and with her daughter, cellist Anna Litvinenko. Together with pianist and Steinway Artist Mirta Gómez, Sahily founded the piano duo En Blanco y Negro with a debut performance at the Steinway Piano Gallery in Miami, Florida, where she resides. Sahily has a devoted following of piano students and is Musical Director at St. Dominic Catholic Church in Miami, where she also directs a concert series featuring talented young musicians and distinguished guest artists.