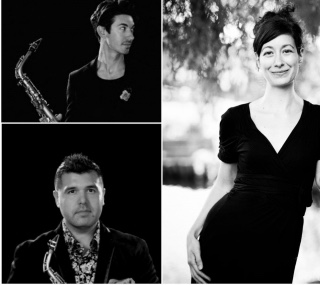 Hernandez is a D’Addario Performing Artist and plays exclusively on Reserve Classic Reeds and performs on an historical saxophone built to the acoustical specifications of the instrument’s inventor, Adolphe Sax. Michael currently serves on the faculty of San Jose State University.

San Francisco-based alto saxophonist Michael Mortarotti enjoys an active performing career that has taken him throughout the United States, Germany, Poland, Switzerland, and the Netherlands. As alto saxophonist of the Mana Quartet, Michael has been featured on numerous festival and recital programs, including the Bravo! Vail Valley Music Festival, Music on the Edge Concert Series, and as a concerto soloist with the National Music Festival Orchestra, Lubbock Symphony, Echo Chamber Orchestra and the Hot Springs Music Festival Orchestra.

A recipient of the Alice Coleman Grand Prize at the Coleman Chamber Ensemble Competition, he has earned a place among past winners such as pianist Anne-Marie McDermott, contemporary chamber ensemble eighth blackbird, and the Tokyo String Quartet. His composer collaborations have led to the premiere of over 30 new works in recent years while allowing him creative partnerships with outstanding performers like the Calder String Quartet and Brazilian guitarist Camilo Carrara. These collaborations can be heard on the NAXOS label and on NPR’s Performance Today.

Amy Zanrosso, a powerful and dynamic musician, has worked within a wide range of musical genres – classical, contemporary, musical theatre, German cabaret, and tango. Much in demand as a collaborator, and a chamber musician at heart, Amy has shared the stage with acclaimed soloists and principal members of numerous symphony orchestras. She has appeared as soloist with the Symphony of the Kootenays and the Russian Chamber Orchestra and has worked with Gustavo Dudamel for chorus rehearsals of Beethoven’s 9thSymphony. In 2016 Amy went on tour to China with the GRAMMY award-winning Pacific Boychoir and was also the pianist for Chorissima – the five-time GRAMMY award-winning San Francisco Girl’s Chorus Premier Ensemble throughout the 2017-18 season. In her years in Montréal, she specialized in repertoire for cello and piano and was invited to assist at masterclasses led by internationally acclaimed pedagogues and performers such as Philippe Muller, Pieter Wispelwey, Matt Haimovitz, Peter Wiley and Paul Katz.

Amy is currently based in Oakland, California, and is a faculty member at the Pre-College of the San Francisco Conservatory of music. As well as freelancing in the Bay Area, she is part of a number of local ensembles, most notably The RossoRose Duo with violinist Alisa Rose and The iO Piano Quartet whose focus is fundraising for the San Francisco Musical Fund Society with all proceeds going towards music scholarships for young Bay Area students.

Amy is steadily realizing her master plan of learning and performing all existing piano chamber music and when not practicing Beethoven or Brahms, she can be found hanging out with her husband and dog or riding her bike to rehearsals.